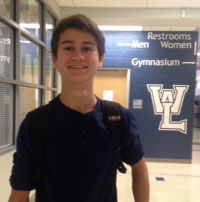 Q: Where did you go to middle school?

A: JC Booth in Georgia.

Q: How was your move from Georgia?

Q: Why did you move?

A: My dad is in the Army. So we move every two years.

Q: Have you lived any cool places?

A: I lived in Korea, that was definitely interesting.

Q: What’s been your favorite place that you’ve lived?

A: I guess here. I mean, this place has been pretty awesome so far. Other places have been good, but Korea wasn’t nearly as great as you’d think it is. The schools were bad and there were lots and lots of people. And all the people were rude. They’d all bump into each other on the street and then not even apologize.

Q: When did you first start running?

A: In seventh grade.

Q: Wow, that’s really impressive. Are you surprised by how good you are?

Q: Do you get nervous before races?

A: It depends who’s in the race. Like, I’m nervous for Regionals today. There’s going to be a lot of good runners, and I’m not the best, so I’m going to be at least a little nervous. But you know, I wasn’t nervous before the Glory Days race because at that point of time I was faster than most.

Q: Do you have any rituals before races?

A: I have my headband. I always wear my headband while running. It’s just a headband, but it’s an amazing headband. My girlfriend Bella gave me that headband. It’s a lucky headband. Also, I carry this Georgia coin with me everywhere I go. It’s my lucky coin.

Q: Why should people do cross country?

Q: Do you play any other sports?

A: I used to play soccer. I used to do wrestling. I used to play basketball. I also played tennis for a little bit. Basically in middle school, I played every sport just to see which one was my favorite one. And I decided running is pretty awesome.

Q: What are some short term goals you have?

Q: What are some long term goals you have?

A: Oh, I don’t know. I’m not really a long term thinker. I just want to get through right now, and then I’ll think about later.