Saving the planet, one class at a time 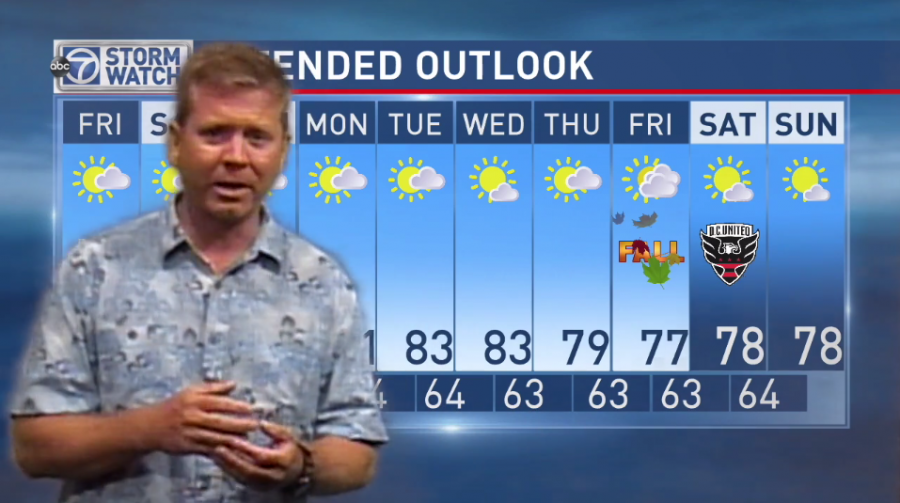 Mr. Ryan Miller has been teaching Environmental Systems and Societies (ESS) and Geospatial Tools and Techniques (GTT) at the school for over a decade. Outside of school he is a part time meteorologist. He sometimes forecasts the weather for ABC-7 and for WTOP Radio. As the “resident weatherman” of the school, he can be seen on most “Friday Shows” of the Daily Dispatch giving a rundown of the weather for the weekend.

Despite his love for the classroom now, Mr. Miller was not always planning on becoming a teacher. After college, he started graduates school, but quickly dropped out. He then worked at a law firm as an environmental consultant. He did not enjoy that either, so when he happened to hear about a teacher prep program through Virginia Tech he decided to try that.

“I started [at the law firm], and it was driving me crazy because it was terribly boring,” Mr. Miller said. “I wanted to do something more meaningful, so I got lucky and just happened upon teaching.”

Mr. Miller has been teaching ESS at the school for 12 years. It is taught over two periods and covers a plethora of topics, including: climate change, energy production, ecology, resource use, biodiversity, atmospheric systems, soils and food production. The class includes lots of field trips and outside time, as well as lots of hands on activities.

“I really feel like I learned so much from that class,” senior and current GTT student SJ Starr said. “I went into [last year] thinking ‘ok, environmental science is interesting, so let’s see if I actually like to study it’ and I learned that I love it. Hopefully I’ll get to go on to study it in college.”

The environment is an important topic for Mr. Miller, who says that he enjoys teaching ESS most. “There’s never a shortage of things to talk about [in ESS]. I try to teach it a little bit differently too, and not make the workload overwhelming,” Mr. Miller said. “Most importantly, I really want students to come away from the class thinking oh wow, there’s this possible job, or this possible career, or this possible major [in the environmental science field].”

Mr. Miller has been teaching his other class, GTT for 10 years. It mainly focuses on the use of the Geographic Information System (GIS) tool. It is a mapping tool that is used to manipulate, analyze and manage data relating to geographic data. It can be used to look for patterns in issues such as pollution, disease outbreaks or migrations of populations.

“So far I am mostly just getting used to the program. A lot of the other kids who already took the environmental science class are like, ‘Oh, we already know how to do this,’ but right now I’m really just learning how to input data, but I am enjoying just getting to use it so much,” Starr said. “In theory I will also be using GIS work in my extended essay [for the IB programme].”

Many of Mr. Miller’s former students have now received degrees and hold jobs in the environmental studies field. In both classes he teaches, he strongly emphasizes that there are jobs for people who know how to use GIS or are interested in working with and for the environment.

“I feel like a lot of people hear environmental science and think ‘go eat ramen for the rest of your life because you’re not going to make squat,’ and I think that’s wrong,” Starr said. “One thing that I really learned from the class is that there are ways to make money from saving the planet instead of just using it.”