The Man Behind The Curtain 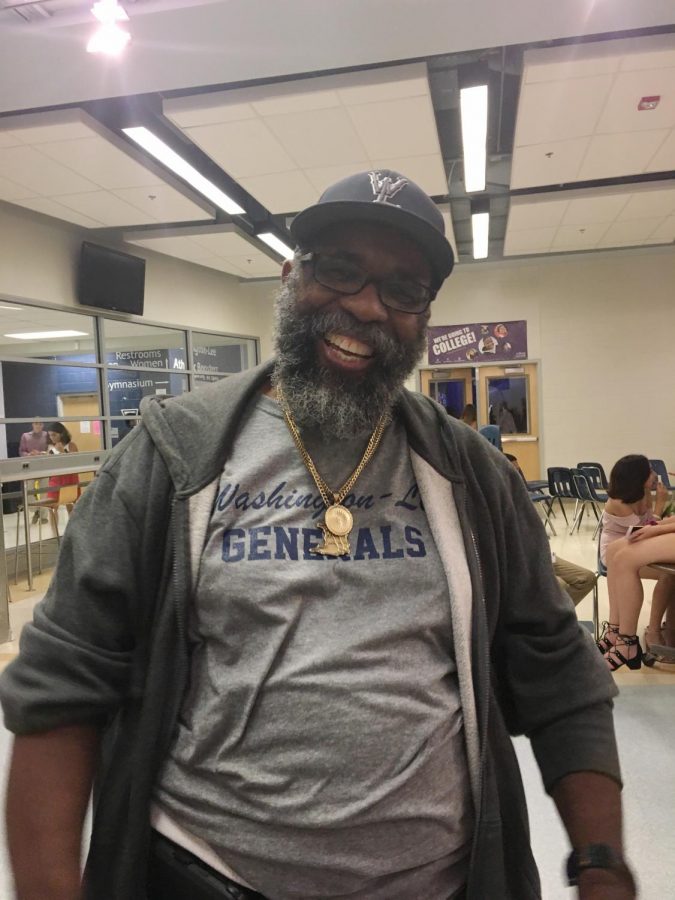 Mr. Glenroy joining in the fun at the Homecoming Dance of 2018. Though he works all day at the school, he still finds time to help out the students after school hours.

Mr. Glenroy Williams, commonly known as Mr. Glenroy, treads through the empty hallway, smiling at the few stragglers filing out of the building. Attached to his hip, a small music player fills his ears with Reggae music and urges him to dance and sing along as he cleans up after the messy students.

The last bell of the day had already rung through the vacant, clean hallways of the school. The once crowded classrooms are empty in an instant, and by the time the students have fled, the once clean hallways are filled with trash and dirt.

Throughout the day, students pass him without having a second thought, not really knowing how much he does for the school. Not realizing that Mr. Glenroy is still here hours after they leave and a while before they walk into the door in the morning.

After 23 years of working at the school, Mr. Glenroy would not change it for the world. He loves this school more than anything. “It’s my home,” Mr. Glenroy said.

Even though he cares so much for the school and the people in it, most kids do not even know his name. Take freshman Cassidy Urbancic, she does not know the custodians personally, yet she knows of them.  According to Urbancic, she feels like more people, including her, should know of him because, as she puts it,

“He is very important and custodians are very helpful people,” Urbancic said.

Mr. Glenroy helps a myriad of people on a daily basis, especially sports teams. He is constantly doing things for them, along with helping out the school in general.

“Almost every day we train, we have to ask him to move out the poles that separate the doors of the school (to move the cheerleading mats),” Koch, who trains six days a week, said. “He always has a smile on his face. He never groans and he’s never upset that he has to do something. He’s always willing to help us out.”

To most people Mr. Glenroy is just a member of the custodial staff who goes unnoticed while walking through the halls. However, Mr. Glenroy is a real person, with a life and an unforgettable personality. During his free time, he loves spending time with his friends in the outdoors. But he mostly enjoys being with his family.

“Oh, I’m close to all of my family. Especially my wife,” Mr. Glenroy said. “She and I are very close to each other.”Mr.

Glenroy is a real life superhero. His entire job is based on helping people, and most of the time, he does not get the recognition he deserves. People do not always say thank you aloud, but for the most part, they do think it to themselves. It is just about whether they express it or not.

“Mr. Glenroy, I know a lot of people don’t think that the custodial staff are a big part of the school, but you are one of the biggest parts of the school. I love you very much and the entire team (varsity cheerleading) loves you very much,” Koch said, addressing Mr. Glenroy.

However, the love goes both ways. Mr. Glenroy loves the students at the school just as much as they love him, possibly more.

“The kids. They give me joy. I like to be around them,” Mr. Glenroy said. “Some of them make me get angry, some make me laugh, and that is the most important thing. Some of them when they make me angry, they come back and make me laugh. I like to work for them, I like to make them feel happy.”

Mr. Glenroy strives to do the best he can to make the school into the best environment he can make it. In return, he only asks one thing of the students.

“I would like you to come to the school, and take in as much education as you can because you are the future of tomorrow,” Glenroy said.

While pointing to a backpack filled with books, binders, and notebooks. He looked up and said, “Your future is in your backpack. Everything you have inside there is going to help make you a better person.”

On top of simply learning in classrooms, Mr. Glenroy has taken it upon himself to help teach life lessons to the students. One of the biggest things he urges kids to do is say “please and thank you.”

“Please and thanks take you a long way. You might not see the benefit of it now, but when you leave here and get outside, you might want something done,” Mr. Glenroy said.  “By just saying please, the door will be open. And by just saying thanks, they will try to help you again.”

He feels that he is also responsible for the students who go to this school. He longs to see “his kids” graduate.

Mr. Glenroy hopes that everyone he encounters at the school will achieve everything they possibly can. To help, he only has one piece of advice.

“Keep your feet on the ground, and keep reaching for the stars because it’s yours,” Mr. Glenroy said. “Don’t take your feet off the ground, stay right here, but keep on reaching and you’ll get everything.”