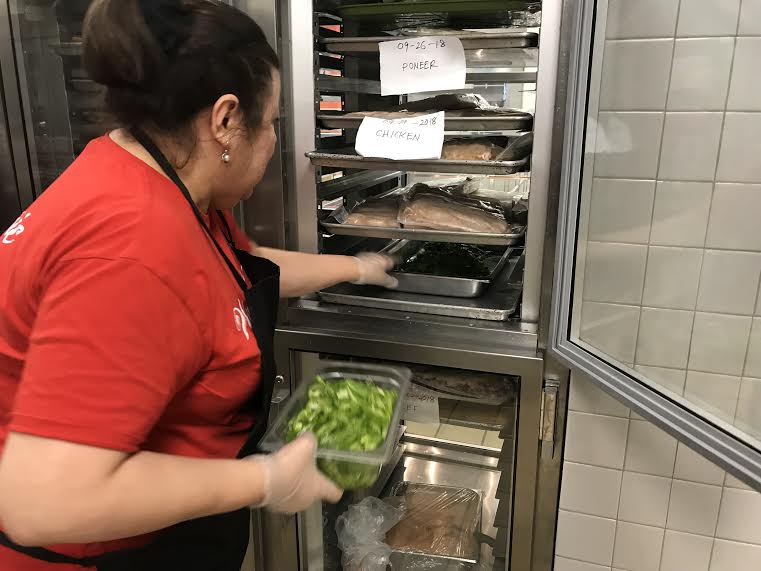 Ms. Nampha retrieves fresh peppers from one the many refrigerators in the cafeteria to prepare a sandwich for the students of Washington-Lee.

To the majority of students, lunch time is the most anticipated time of the day. When students go to the cafeteria they expect a lot, including a fast and timely lunch, well flavored food, and a diverse palette. However, no one seems to question how they receive these commodities. Most people do not give the production behind their lunch a second thought, not to mention those responsible for putting in the effort to make it.

When students at the school were posed with the question of whether they think about how their lunch is prepared, or even just the effort put forth by the cafeteria workers, it was met with a common response: not really.

“I remember in 7th grade we made cards for the lunch ladies and we thanked them for what they do,” freshman Halleluya Guta said. “That’s the first time I thought of that.”

The general student lunch routine goes as follows:; standing in line for approximately five minutes, grabbing their food, maybe saying a quick hello to the cafeteria worker preparing their lunch, and having about twenty minutes to eat. Simple enough at first sight. Behind the scenes however, it gets a lot more complicated. All students interviewed had the same general guess as to how much time is actually put into the making of their meals:; three to four hours. In actuality, each cafeteria employee works about eight hours per day preparing food.

The cafeteria manager at the school does not receive much recognition, but this does not seem to bother her. Ms. Jacqueline Nampha moved to the United States about 30 years ago from war-torn El Salvador. Despite that hardship, she has made an exceptional and fulfilling life for herself. Slowly working her way to the position she is in now, she has shown a lot of determination.

“It’s hard for the cafeteria workers to feel like they are part of the school, whatever school they’re working in,” said Ms. Sandy O’Connor, Ms. Nampha’s supervisor. “So anything that students or staff can do to include them or recognize them as being part of the team here at the school is good, because they really feel like they are part of the team, but a lot of time they don’t get included. But one person saying I really appreciate what you do makes a huge difference.”

Ms. Nampha, however, seems quite content. She had a lot to say about how much joy her job brings her. “It makes my day when I have a student who comes and says ‘Thank you.’ and says ‘I really like what you do!’,” Ms. Nampha said. “I have a lot of teachers who come and they say, ‘Hey Jackie this is going good. This is only getting better and better.’”

Ms. Nampha originally got into the food business because her aunt invited her to come work at the same hotel that she did. From there, she found a passion for the line of work.

She applied for the job of being a cafeteria manager at the school and got it, and has been with the school for 20 years. “I loved it, and I decided to stay in the food industry,” Ms. Nampha said. Now she educates those who were in her past position.

“We’re really very serious to follow the guidelines to serve healthy and safe food,” Ms. Nampha said. She always makes sure that the food is at exactly the right temperature, and that it has exactly the two ounces of protein required, along with several other things. “I hold a food and service license. I have to take a test every three years, and I have to prepare myself. I have to teach myself all the regulations, like temperature, wearing gloves, wearing hair nets.”

Aside from this, she also practices these things every day with her coworkers as she trains them. “I write down for each employee what needs to be done, go over the menu and also check for the next day what will need to be done.”

It seems that along with always being timely and prepared, the cafeteria employees are also always friendly, which is no small feat. “I haven’t had any negative interactions with them. They seem really nice and happy all the time,” Guta said about the cafeteria workers. Ms. Nampha never fails to put others before herself, giving forth 100 percent of her effort to make the students happy.

She seems to always be working, pushing herself to the limits. It can make a person wonder how she can keep from becoming overwhelmed. “Some recipes are harder to make than others, but if I see that they like to eat it we do it with joy,” Ms. Nampha said, speaking of the students.

Ms. Nampha has go-to’s in order for her to keep a balanced life and keep her head clear. “For me to relax I try to take a walk in the park when I get off, or I go to the gym when I can,” Ms. Nampha said “On the weekends I spend time with my family and do something that I like, go to a park, or go somewhere. Not just work and stay home.”

She made sure to express how proud she is of her job. “It’s very fulfilling and I’m doing something — we, as a team, are doing something very important for the school, that we’re part of this school and we are helping.”