Senior Henry Nissen was a large part of the virtual orchestra concert. 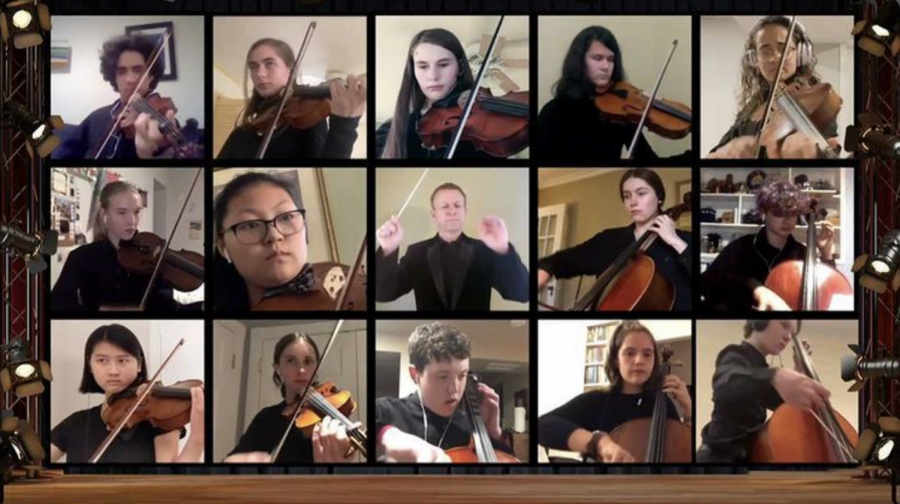 Henry Nissen and the rest of the orchestra perform virtually.

Focused on the game, a young boy stares at his screen filled with block people in a block world. To an outsider, he looks like he is simply playing a game. In reality, he is honing his craft, recording himself playing the game, something he will later edit to the best of his abilities. While watching a video production of any kind, it is not often that one stops to think about all the work that was put into it to get it to run smoothly. Senior Henry Nissen is living evidence of what it takes, someone who has been editing since middle school, starting with Minecraft gameplay. It was this early infatuation with video production that led him into the more advanced work he does now. He explained the steps necessary to putting together a smooth virtual orchestra concert, something he and his father made happen dexterously.

Nissen heard about the concert because he himself is a member of the chamber orchestra. He was also looking for things to do due to the lack of usual activity caused by the pandemic. It was because of these things that when his dad, a professional video producer, offered to lead production of the concert, Nissen knew he wanted to help.

The process proved itself somewhat difficult. In order for the audio to sync up, the musicians had to record themselves clapping after a countdown which would be a constant across all the videos. Unsurprisingly, though, in a fully virtual production, there is bound to be some technical difficulty, which Nissen had to deal with.

“For the band recording there was one person—he ended up sending in another recording later—but for his first recording, he recorded digitally, so he didn’t actually have a mic to pick up the clap,” Nissen said. “I could see in the video that there was a clap but I couldn’t actually hear it, so that was an issue.”

Despite these setbacks, Nissen was pretty pleased with how it all turned out, with the work he and his dad put into it.

“While I was working on it it felt really frustrating but then once the entire thing was finished and it all came together,” Nissen said. “I couldn’t hear any of the individual [issues].”

He first became interested in editing and technology at the age of eight, at which he started recording Minecraft videos for YouTube. From there his passion only heightened. Only in later years did he begin focusing more heavily on editing itself and improving the craft.

“Before, I was more focused on highlighting the content, versus now, as I’ve developed more, it’s the editing in some areas that can feel like it is the content, almost,” Nissen said.

The orchestra concert offered Nissen a huge stepping stone on his path to becoming a better editor and video producer. He had not had much experience with editing audio in the past, and what he had done was nothing that required editing across multiple people. It was a challenge, but his work paid off and offered him experience that helps in other aspects of his life. He is currently in the process of creating his own model of a game, something he has been working on for a couple weeks. He could see some similarities in what was required for the concert and this other technical skill.

“Obviously not all of it carries over, but I feel like the fundamental skills of having just a bunch of different pieces of material, getting those all synced up and feeling like they’re in place definitely shows up in both,” Nissen said.

In the future, Nissen can see himself doing video production or something along tech-based lines.

“In terms of how [the orchestra concert might help in the field], again, it’s the fundamental step behind it, like the whole idea of having stuff sync and that everything has its place,” Nissen said. “That’s something that I think I had before I started working on the orchestra videos, but I definitely started getting a better understanding of using those concepts while working on it.”