Top new locations in The Ballston Area this Summer 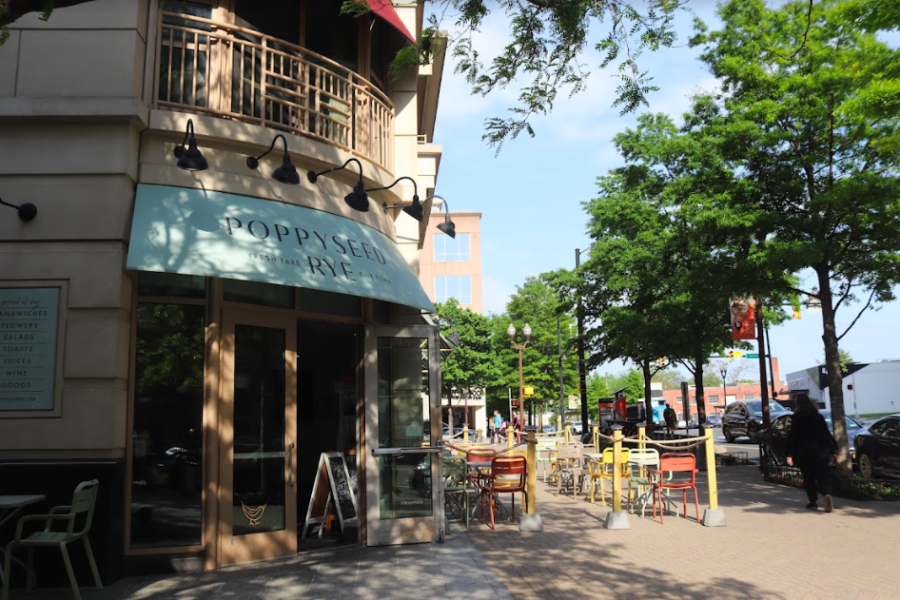 Poppyseed Rye’s entrance with outdoor seating to the right

Summer is almost here and everything is changing, not only with school but in the Ballston area as well. New stores, restaurants, and locations have sprouted nearby. Here’s what you may have missed!

Not just any new restaurants have opened; a flower shop and sandwich parlor mash-up has just arrived in the area. Poppyseed Rye is located on the corner of Wilson Boulevard and North Quincy Street, now a popular destination for all kinds of plant lovers.

The store serves a variety of food, such as sandwiches, toasts, salads, baked goods, pressed juice and charcuterie boards, as well as inedible items such as flower bouquets, vases, bath bombs, soup and candles, all of which are sold on the Poppyseed Rye website as well.

Inside, the shop’s ceiling and entrance are decorated with fake hanging vines, roses, wisteria, and flowers of all kinds, but the real flowers and bouquets are sold on the back right side of the shop. Florist Akeda Maerdan works hard crafting beautiful bouquets to display in the refrigerators near the seating area that are sold throughout the day.

As well as indoor seating, there is plenty of room outside to sit with a group of friends or on a date next to the patch of green space. The store is a popular location amongst teens, young adults, and hard-working mothers when the weather is nice.

Not only is the shop a good place to hang out with friends, it is also a great place to learn as well. Bouquet crafting workshops are available for purchase regularly, where participants can learn how to make professional-looking bundles of flowers with friends or co-workers.

Just across the street from Poppyseed Rye is the creative new Mexican food restaurant, Taco Bamba. Since its opening, the shop has become known for preparing taco combos of all kinds. This is the tenth store to open in the North Virginian chain, with much demand for it to expand outward.

The owner of the chain, Victor Albisu, prides himself on making new and interesting taco combinations, often serving unique dishes per location. Many of the special dishes are inspired by other signature restaurants in the area, reinventing the surrounding food culture into something new.

The restaurant sells tacos for breakfast, lunch, and dinner, as well as churros for dessert. There is some indoor and outdoor seating but the Ballston location mostly delivers food or makes it to-go.

The chain is so popular that merchandise is sold online through the Taco Bamba website. Albisu plans on expanding it nationwide in the future, according to “Taco Bamba” from The Arlington Magazine.

Food is not the only new attraction in Ballston; new inside the Ballston Quarter is Electric Gamebox, an interactive gaming experience.

Originally from the United Kingdom, the Ballston Quarter location is the first in America. The gaming system uses a large box of projected touch screens for the players to interact with by solving puzzles and working together to complete tasks. Each box has surround sound, motion tracking, and can hold up to six people.

New games are released monthly, each with different levels of difficulty for any age group or experience level. The motion tracking is recorded with colorful visors with alien-style antennas on top that players wear while in the box.

The location is on the second floor of the Ballston Quarter. The windows are blacked out and covered with pictures of people playing the games, making it easy to spot. Visitors can walk in or reserve a time on the website if going with a large group.

Also popular is the Squid Ink Half & Half Dog, which includes squid ink in the batter and the end of the dog cut and curled outward to look like a squid.

There are two locations coming to Arlington, one in Ballston and one in Crystal City. Due to an unspecified delay the Ballston location has not been opened yet, but is coming soon, although no opening date has been provided. The Crystal City location is already up and running as of February 2022.

The Ballston location will replace the previous Mi and Yu Noodle Bar, which went out of business during the pandemic, located next to Maizal in the far right corner of the food court. Although, Oh K-dog is not open yet, their menu can be found on their website.

What did you think about this story? Do you have any suggestions for improvements or other articles that you would like to see? Please use the contact form to communicate with us! (Keep all information school-appropriate)