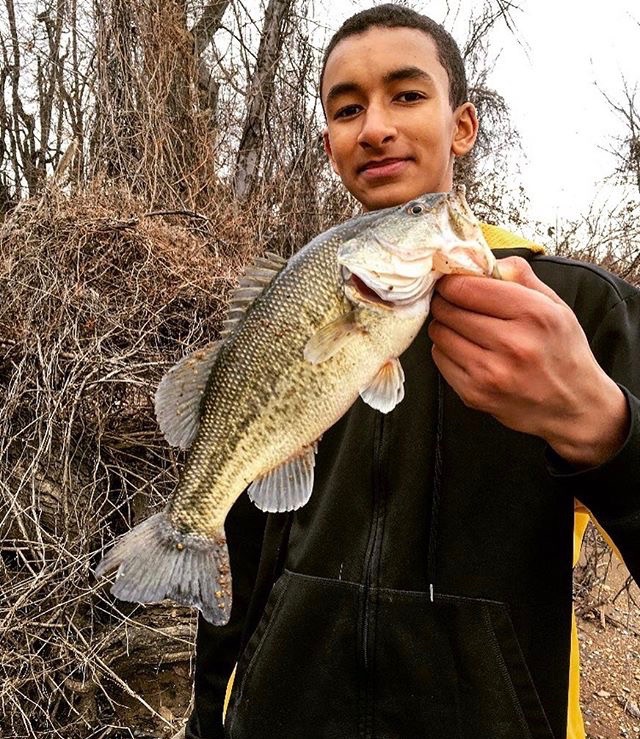 Sophomore Adam Carter catches a largemouth bass in a pond near National Airport.

Fishing is an old sport and one that is very easy to learn but hard to master. Now, there is a difference between fishing and putting a bunch of worms on a hook and tossing it into a pond. Surprisingly, fishing takes more skill than luck. In Arlington, in the Four Mile Run area, there are a number of species to target, including goldfish, bluegills and eels. The Chesapeake Bay, on the other hand, has everything from half pound perch to 20-pound striped bass.

There are two basic kinds of fishing, freshwater and saltwater. Saltwater fishing can be the most expansive and can take more skill, but it can also take less at the same time. It all depends on the conditions and what you are fishing for. Catching some bluegills at the  local pond takes much less skill than catching a 1,000 pound blue marlin. Yet, catching the most easily scared brook trout takes more skill than catching a flounder on some bacon.

For two avid fishermen at the school, sophomore Adam Carter and senior Andrew Malone, who have been fishing their entire lives, saltwater is more ideal for the “bigger fish, there’s more variety of fish,” Carter says “and everything smells like ocean.”

Both Carter and Malone are well aware that starting as a big a sport as fishing can be a daunting task, and Malone, whose personal best is a 120-pound striped marlin, had a few tips for the beginners. “When you are first starting out, definitely do not buy the cheapest rod. Buy the second cheapest, like an Ugly Stik,” Malone said. “Also when you are just starting out, watch YouTube videos and tutorials.”

Those interested in starting up the sport should consider fishing during the upcoming shad season, which usually starts around mid-March and ends around mid-April. Shad, a type of fish that spend their lives in the ocean but come into rivers to spawn, are very aggressive and might just attack a shad dart thrown in their face. In order to catch a shad, just cast a small lure to areas that likely have nests. At a minimum, shad fishing can be done with only around $45 or less, depending on the rod and reel.

When people put in the work, time and effort into fishing, the results will come. Fishing can make a lot of money when people compete in tournaments. Anyone can enjoy this ancient sport whether they are fishing their grandma’s lake or participating in the next bassmaster tournament.