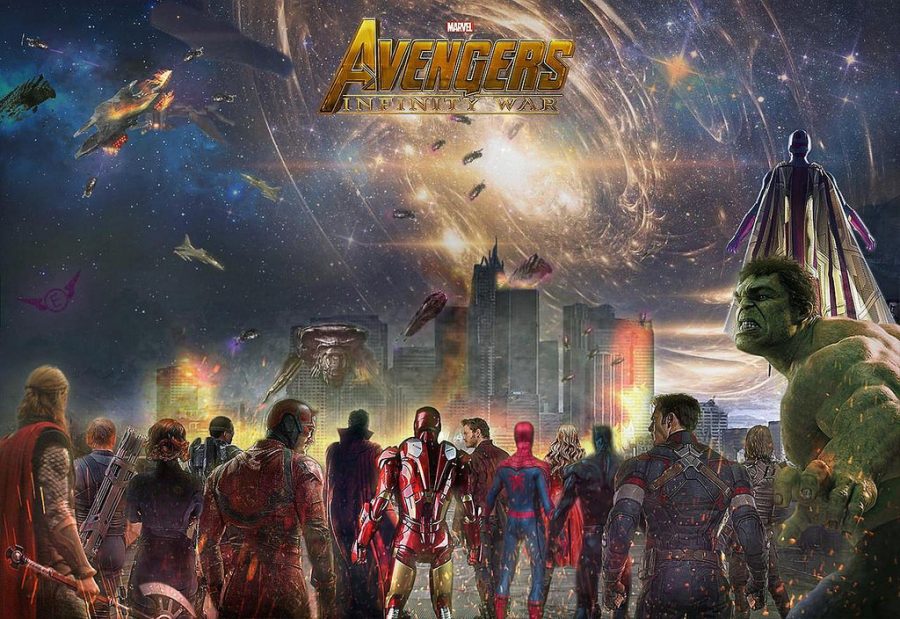 The Marvel Cinematic Universe Characters represented on a movie poster

**SPOILER ALERT: Do not read unless you have already seen Avengers: Infinity War or if you do not mind major spoilers.**

Unless you have been hiding under a rock for the entire month of April, you have most likely heard about the hype around Avengers: Infinity War. Since its premiere last week, it has enjoyed an incredible level of box office success, earning $850 million by Monday worldwide. The profits are expected to climb to $1 billion  worldwide by the coming weekend. This level of success is not unexpected, which was promoted as the crowning jewel of Marvel’s cinematic universe. The franchise began ten years ago with the release of Iron Man, kicking off  what is now seen as a collection of the most anticipated movies in the world. With the films officially announced as Avengers: Infinity War – Part 1 and Avengers: Infinity War – Part 2, In early 2015, longtime Marvel pros the Russo brothers joined the project to direct the films. Then, in July 2016, Marvel revealed that the Part 1 and Part 2 of the titles would be removed, with the former first part known simply as Avengers: Infinity War and the former second part to be renamed at a later time.

For anyone who is unaware of the plot, the film follows the Avengers, both old and new characters, as they race to keep Thanos from killing half of all life in the universe in order to make life better for the survivors. He plans to do this through the use of the six Infinity Stones, which are remnants of the formation of the universe that hold the power to manipulate different things: time, reality, space, mind, soul and power. Thanos’ whole premise with his plans revolve around the fact that the universe has a finite amount of resources that all of life will consume mindlessly. He believes that to maximize the use and  efficiency with the resources, a randomly selected genocide of all people will have to die, and in return, will result in planets with half their population with a full amount of resources.

One of best parts of Infinity War is the villain. Throughout the film, it becomes evident that Thanos honestly thinks he is doing the right thing. While he is horribly misguided, the exploration of his motivations develops his character, so that the Avengers do not end up fighting a one-dimensional plot device of a “take over the world” villain. In some earlier movies, marvel has been notorious for one dimensional villains, such as Malekith, with his only goal as a villain being “bringing darkness to the world” in the Second Thor movie, Thor the Dark world.  A huge amount of this character development comes from the death of Gamora, his adopted daughter. He first met her when he mass killed half of the people on her planet and raised her himself, although she hates him for what he had done. To gain possession of the soul stone, however, he finds out that he has to sacrifice someone he loves.

At first, Gamora  taunts him, thinking that he’s finally failed because she believes he is incapable of love, before he throws her off the side of the cliff on the planet Vormir, where the stone is kept. The scene is one of the most emotional in the film, as she spends her final moments begging him not to kill her. Even in this heart-wrenching scene, the mighty titan Thanos even shed a tear. It becomes clear here that he thinks he is doing the right thing by trying to kill half the universe, and he has sacrificed the one person he loves the most in order to do it.

Those who have already witnessed the incredible story within this movie, and cannot quite keep a secret will most likely say “everyone dies”. They are not far from the truth. The film shows the Avengers experiencing something very new to them: losing. Thanos gets all the Infinity Stones, and with the snap of his fingers, he kills half the universe. One by one, the randomly-selected victims turn to dust and ash. Included in the body count is many of the Avengers: Black Panther, Spider-Man, Doctor Strange, Winter Soldier, Scarlet Witch, Drax, Groot, Star-Lord, Mantis, along with former S.H.I.E.L.D. agents Nick Fury and Maria Hill all disintegrated from Thanos’ use of the Infinity Stones. Loki, Heimdall, the Vision and of course Gamora were all killed directly at the hands of Thanos.

Although all the deaths seen in Infinity War are likely to make their way to our hearts, a few of these fallen heroes’ death scenes caught the emotions of the audience more than others. When Peter Quill’s lover, Gamora, was thrown carelessly off the cliff on Vormir, as well as when Vision instructed the Scarlet Witch to kill him, only for Thanos to turn back time to rip the infinity stone off his head, killing in the process, this left the entire theatre speechless.

Despite these incredible scenes by these acting veterans, Spider-man, played by the incredible 21-year-old Tom Holland had arguably the saddest death scene in this 2 hour and 28 minute masterpiece. Poor Peter Parker, just 15 years old, improvises his final words with his role model/father figure of Robert Downey Jr.’s Iron Man. The iconic  “Mr. Stark, I don’t feel so good” and the “please Mr. Stark I don’t want to go,” from Parker was sure to make tears well up in the eyes of the audience and left us to say an early goodbye to everyone’s favorite underdog.

This leaves the original Avengers, along with some other Marvel heroes, the clean up the mess in part two. It is incredibly likely that these characters will be brought back somehow when the next Avengers movie is released, though. Spider-Man has already been confirmed for a 2019 sequel, and Black Panther was an undeniable success for Marvel. A third Guardians of the Galaxy movie is also already confirmed, with Mantis listed amongst the cast on IMDB (she could make an appearance in a flashback, however, so this does not necessarily mean much on its own). Fans have been coming up with ideas since the film’s release about how the dead characters could be brought back to life in the sequel. Some of the leading theories involve the Infinity Stones. The Time Stone could be used to go back to before they were all killed. Another fan theory involves the Soul Stone which, in the comics, can contain souls and return life to its natural state, which could potentially revive the dead Avengers.

Some characters, however, might not be returned to the screen. The character deaths caused directly by Thanos, rather than by the power of the Infinity Stones, had much more finality to them during the film. Most believe that Heimdall, Loki and Gamora will stay dead in part two. Their bodies were shown on-screen after they were killed, and they did not look like they were going to be coming back to life any time soon. Some fans hope, though, that Wakanda’s advanced technology could be used to design a new body for Vision’s consciousness, which could bring him back, too.

The film was not entirely dust, death and snapped fingers, though. Jokes and lighter scenes were sprinkled throughout. Humorous one-liners have become more of a staple in Marvel movies, and offered periodic moments of laughter. One running joke followed Bruce Banner’s issues with the Hulk, who did not want to come out and fight. Many fans were shocked when it was revealed that tech mogul and science genius Tony Stark still used a flip phone. Thor’s interactions with the Guardians provided another joke as Peter Quill (Star-Lord) deepened his voice at one point to stand his ground against the Asgardian.

The film does a difficult task with ease, balancing over a dozen main characters in the complicated narrative of Infinity War, although the cast is much smaller by the end. Marvel super-fans and casual movie-watchers alike will be entertained by the high-stake adventure. Despite the dark themes, the film surpasses its expectations. With Ant-Man and the Wasp coming out this July, and Captain Marvel following in the next year, Marvel is sure to keep its fans engaged until the release of the fourth Avengers movie in May 2019, in hopes of ending what Thanos has started.