Black Mirror on the wall 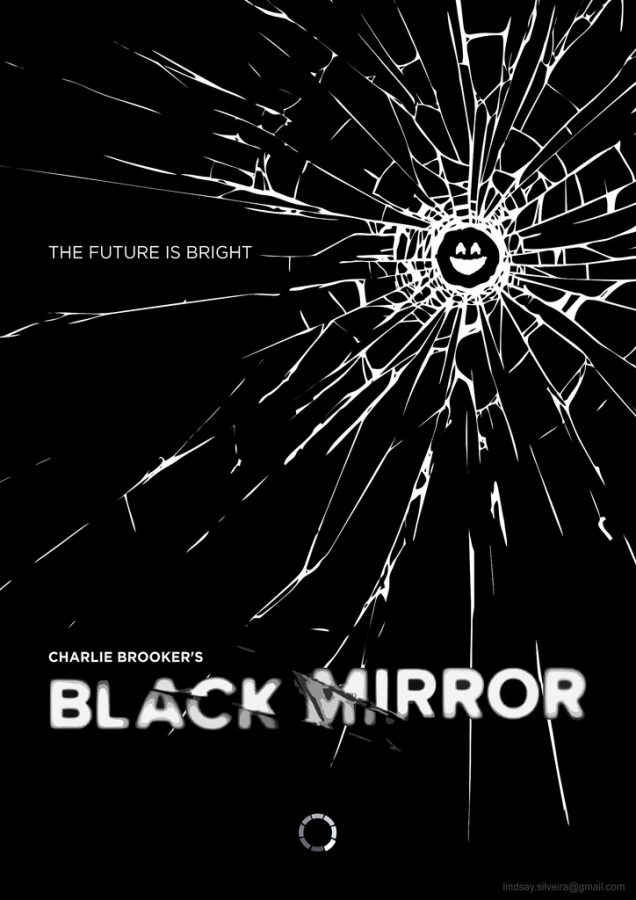 Black Mirror’s poster shows a screen shattered to look like a smile with the tagline “The Future Looks Bright”. The show’s title comes from how the black screens of turned-off electronics function as mirrors.

Black Mirror, a science fiction anthology series on Netflix, has been making headlines since its premiere in 2011. Each episode tells a self-contained cautionary tale of futures with new casts, contexts and plots where technology controls, terrorizes and possibly destroys humanity. Episodes, which are primarily written by creator Charlie Brooker, serve as entertainment, but also as manifestations of the world’s increasing technology paranoia. The usually hour long episodes are very hit or miss. The show puts deliciously mind twisting tales like “USS Callister” alongside underbaked head scratchers like “Metalhead”.

The most recent installment in the series, which hit Netflix on December 28, was a groundbreaking departure from not only the normal form of Black Mirror, but also the way TV has functioned since the creation of the medium. This season premiered just one, two-hour-long viewing experience  called “Bandersnatch”. That sounds normal enough, but of course there is a twist. The story is about a programmer in the 1980s attempting to create a choose-your-own-adventure game, but the story itself is also a choose-your-own adventure, where the viewer controls the plot with the tap of a finger.

The show uses this concept to discuss the ideas of multiple realities and the existence of free will. These are scary concepts that seem obvious for any meta choose-your-own-adventure to tackle, but it isn’t really about technology. This is what makes “Bandersnatch” a truly unique installment of Black Mirror. It is not just a cautionary tale about technology as other episodes are, it is a real life demonstration of the new choose-your-own-adventure technology that Netflix has created, which to add to the creepiness, has previously been used on Netflix’s children’s shows.

The meta-ness of this story is certainly milked for all its worth, with one path of the story ending in reports of a present Netflix reboot of the original video game, which is, of course, what you have been watching this whole time, and another ending in a revelation that the action is all just scenes from the set of “Bandersnatch”. Unfortunately, it does not totally pay off.

Most choose-your-own-adventure readers enjoy the ability to go back to choose a different path when they get bored of the one they are on. The fatal flaw of “Bandersnatch” is that it does not allow the viewer to go back or fast forward. Even seeing how much is left in the story is kept hidden. Worse than that, when one of the “endings” is reached the viewer gets sent back to make different choices and are forced to watch a recap of all the action leading up to the “incorrect” choice. So viewers are basically given the illusion of control, without actually being able to control anything, just as the programmer in the story decides to do for his video game in the end. It is purposefully infuriating.

“Bandersnatch” is definitely thought-provoking and scary, but not in the fun way that most Black Mirror episodes are. What takes the joy out of this one is also the thing that makes it unique, the audience interaction. The viewer knows what’s coming, so the major events seem obvious.

This story, though, did teach a valuable lesson about technology, as all Black Mirror episodes do. Bandersnatch shows us that Interactive TV projects are not the way of the future. TV was invented as an entertainment medium and while many shows are meant to be thought provoking, most viewers use TV as escapism. They watch TV to be told a story, and even if the point is that the decisions do not, ultimately, matter, viewers do not want to have to choose how the stories end.