We tried them so you don’t have to 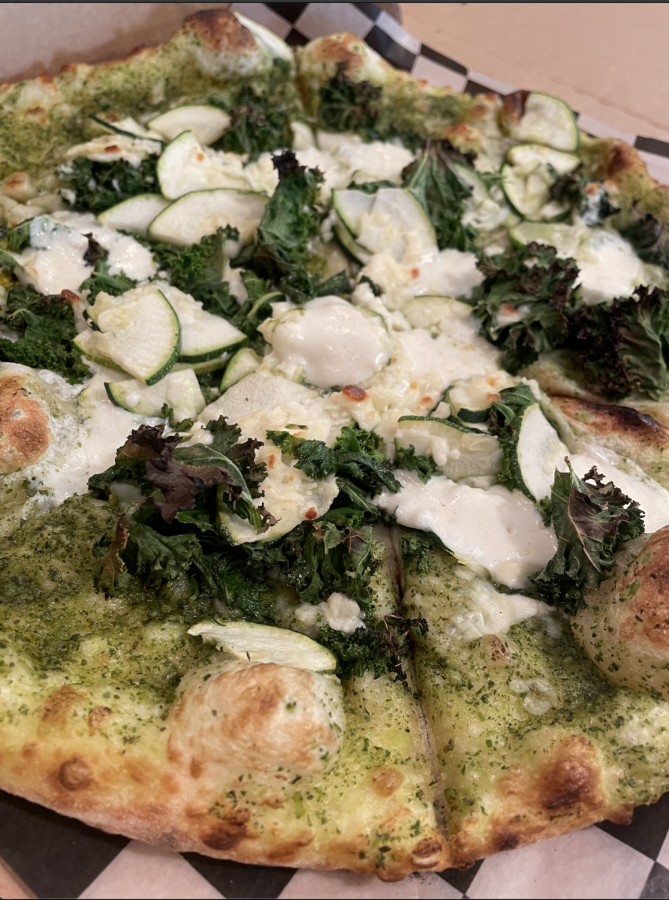 Turu's is one of the several pizza parlors in the area. This is their "green monster"

When scrolling through popular delivery apps such as Uber Eats, DoorDash and GrubHub, to name a few, the large array of options may leave some feeling overwhelmed. What if you just wanted to order a pizza? That should be fast, casual and not something that takes hours to decide on. Crossed Sabres chose three local pizza restaurants, all of which can be delivered to the comfort of your COVID-safe home, and compared them based on size, price, menu variety and more.

Pupatella definitely upscales the pizza eating experience. For those looking for innovative flavor combinations (a Nutella Pizza is listed on their menu) and pizzas heaping with toppings, Pupatella will suit you. The custom pizza section of their menu offers choices of multiple Italian meats, 10 different cheeses and fresh vegetables. The more picky eaters can thrive here as well, although ordering is going to be more of a hassle. A plain cheese pizza can only be ordered through the kids menu, but read the fine print and you’ll discover that it is the same size as the others. The restaurant’s menu also includes a custom pizza option and delivery apps (Pupatella uses UberEats and Doordash) make that process fairly simple, although it does take longer than selecting one of the pre-designed pizzas.

This pizza took about an hour to arrive, although this is likely to change based on when and how much you order. Personally, I ordered seven pizzas (for seven people!). It was still warm upon arrival, but it should be noted that these are personal pizza size. Those work great for smaller get togethers, especially when people have different tastes. However, I would not recommend it for a very large group (if you are only placing one order), as the ordering process would almost certainly be very slow.

As for the taste, Pupatella certainly has its own flare and stands out in comparison to others. Their website boasts using traditional recipes from Naples, Italy (their founder was born and raised in Naples) and it is apparent that lots of effort is put into every aspect. For example, the sauce was more than just filler. It had a kick which subsequently changed the feel of the entire pizza. But, to me, two things shared center stage: The fresh toppings and crust. It was clear that the produce and cheese atop my pizza were fresh, which again showed loyalty to producing the best possible pizza. Unlike many other places, whose crusts are crunchy, this crust was doughy and chewy.

Overall, Pupatella uses unique flavors to provide a more high-end pizza eating experience. I would recommend it for situations when you are looking to impress.

Sicilian first won me over by its versatility. Right away there was a choice in size (hello group events!) and their menu is extensive, including salads, pasta, sandwiches, wings, wraps, calzones and more. When ordering through Uber Eats, there was an easily-accessible menu tab that  allowed for creating your own pizza. The restaurant also allowed for creating half and half pizzas (different toppings for each half) by specifying in the notes section. There were also “gourmet pizzas” which included a margherita pizza and other unique combinations. I would not say that their combos were as original or obscure as that of Pupatella, however, things such as the “Arlington Special Pizza” suggested an appreciation of their community and the “Buffalo Chicken Pizza,” which is served with a side of blue cheese, does seem far from traditional.

This pizza took about 50 minutes to arrive when ordered from 13 minutes away. The larger sizes are super convenient for bigger groups or shared meals (I got three  XL and one L for seven people with some left over). I also ordered a caprese salad to go along with the pizza and I found they complemented each other nicely. The fresh flavors did not blow me away in the same sense that Pupatella did, but it was certainly a positive addition to the meal. Dressing was served in small containers on the side and it came with warm pita bread as well.

Sicilian was simply just good pizza. They did not overdo it or try to get too fancy with putting their own spin on the flavors. The crust was thick enough to hold a hearty amount of sauce, cheese, and vegetables without them falling off, and it certainly was not oily, which is something I have trouble with at places like the Italian Store. It was what I would aim for when looking for classic pizza in Arlington.

I would recommend Sicilian pizza for a variety of events. Their extensive menu should make anyone happy and the large size of the pizzas make them easy to share and order. While not as fancy as Pupatella, ordering from Sicilian may be more appropriate on a regular basis.

Turu struck me as an in-between from Pupatella and Sicilian. The size is similar to that of Pupatella, definitely only for one person. While there is a certain “upscale” factor to a personal pizza, the menu was much smaller, leading to a more fast and casual feel, closer to Sicilian in that regard. This far less extensive menu came in with only seven pizzas to choose from and no other types of food. However, they do have a plain cheese pizza on the menu and adding that to the order was easier than at either of the other places.

Turu is located in the Ballston Quarter, very near the school, and even through delivery their speed was evident. I ordered four pizzas for lunch from seven minutes away and the total time between ordering and arrival clocked in at just over a half hour, much faster than either of the previous places.

I love pizza with dollops of mozzarella cheese and every single one of their pizzas seems to have this, which not only adds flavor, but texture too. Despite not having the largest menu selection, pizzas can be found with both tomato sauce and pesto, which sets Turu apart. The crust was on the thinner side, which was totally fine with the cheese pizza or pizza with just a few lightweight toppings but it did not totally support fuller pizzas like the “Green Monster.”

Overall Turu was a great fast-casual pizza, and I am glad to see it located so close to the school. It’s a great lunch option due to the smaller sizes and short wait times. While harder to pick and choose vegetable or meat toppings (at least online), Turu did the plain cheese option better than either of the others.

All three of these places had unique things to offer and I would recommend any of them for different situations. Turu is great for a quick and easy lunch, especially since the location is an easy walk from the school. Sicilian is best for casual nights in or a COVID-safe, low-key get together with friends, and Pupatella for fresh flavors and a higher-end personal pie. I can honestly say I will go back to all of these places and thoroughly enjoy it, but if I had to give a blanket recommendation I would go with Sicilian. Their menu is sure to please anyone, and though the pizza is simple, it has everything I look for in pizza delivery, so it surprised me in the best way.