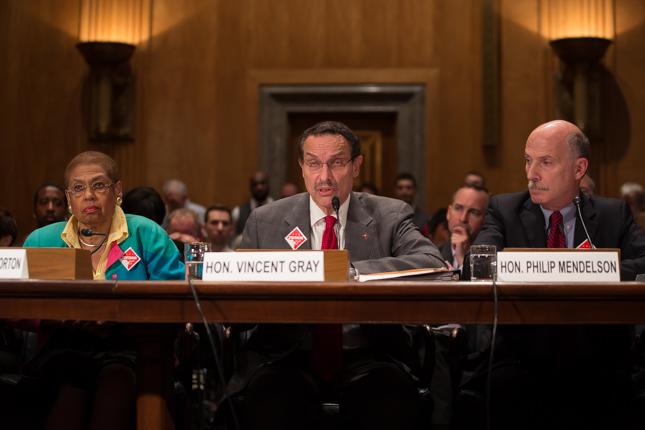 Across the Potomac River in Washington, D.C., momentum is building for the federal city to make the jump to statehood. City politicians in every corner of the District have been touting the concept, with one notable exception: in the halls of the U.S. Capitol building, there is almost zero political will to tackle the issue. A September 15 congressional hearing in which arguments were presented both for and against statehood for the District — the first such event in two decades — was attended by just two of the United States’ 100 senators, and one of those two walked out.

The roots of the District’s predicament run all the way back to the early days of the United States, when the country was governed under the Articles of Confederation, which did not give the central government authority to create a military. This meant that the central government, then based in Philadelphia, had to rely on Pennsylvania for protection, which the state government was not always willing to provide.

After the state refused to dispel protests in 1783, in which hundreds of demonstrators surrounded the congressional building and refused to allow lawmakers to leave without addressing their concerns, congressmen agreed that a capital city under the direct rule of the federal government was necessary.

This need was addressed in the Constitution, which replaced the Articles of Confederation four years later. The Constitution called for a “District, (not exceeding ten miles square) as may…become the seat of government of the United States.” The district was named the District of Columbia and was carved out of portions of Virginia and Maryland at the fall line of the Potomac River, near George Washington’s Mount Vernon estate and the existing ports of Georgetown and Alexandria.

Congress had absolute power over the district, which remained a sparsely populated collection of farms and small towns well into the 1800’s, when the federal government began to invest in its development. Despite the increases in population brought by this investment, the district still retained the status it was granted by the constitution. Mayors of the district were appointed by Congress, and the residents of Washington did not vote for president, or have any representation in the House of Representatives or the Senate.

Washington began to make strides toward democracy during the civil rights era, when the Twenty-Third Amendment was ratified, giving District residents the ability to vote in presidential elections. The amendment was met with relatively little protest from lawmakers, since, at the time of its passing, the District’s voters were evenly split between the Democratic and Republican parties, meaning that no one felt disadvantaged by it. This amendment was followed by the Home Rule Act of 1971, which provided for an elected mayor and city council for the District.

The District remained competitive for only a few years after the Amendment’s passing, when its ballooning African American population (which jumped from 35 percent to 70 percent  between 1950 and 1970) took advantage of the 1965 Civil Rights Act, and gave the Democratic Party a stranglehold on Washington politics. Democrats have never relinquished this hold; the District has only ever voted for Democratic presidential candidates and is one of only three jurisdictions in the country to have given more than 90 percent of its votes to Barack Obama twice.

This has made it impossible for proposals for D.C. to make the final jump to equality in becoming a state, guaranteeing it equal representation in Congress and protection from federal overreach, to gain traction in Republican circles, and declining awareness of the issue has prompted the Democratic National Committee to cease to give the issue any attention.

However, although the national party organization has effectively abandoned the issue, individual Democrats occasionally feel pressure from activists in the District to address the issue. Senator Tom Carper of Delaware was one of those Democrats, and he introduced a bill last year to admit the District to the union as a state, called the State of New Columbia, the name used by statehood activists since the 1980s.

Because the Constitution requires the seat of American government to be located in a federal district like the District of Columbia, a constitutional amendment requiring the approval of two thirds of Congress and three fourths of the states would be required to admit the entire city as a state. However, Carper’s bill finds a way around that by leaving unpopulated federally owned properties including the Mall, the Navy Yard, Bolling Air Force Base and Roosevelt Island under direct federal control. The remainder of the District would would be admitted to the union as the 51st state.

The introduction of Carper’s bill prompted the aforementioned poorly attended hearing in which supporters and opponents presented their arguments to the two senators in attendance.

The supporters’ arguments focused on the injustice they see in the lack of congressional representation for more than 630,000 residents of the District, home to more people than Vermont and Wyoming. D.C. Mayor Vincent Gray summarized this argument in his written testimony writing that “the District of Columbia is the only place in the United States of America where Americans serve in the military, fight and die in wars, serve on juries and are taxed, without voting representation in either house of Congress. That is wrong.”

Supporters of statehood also railed against what they see as the constitutional ability of Congress to meddle in the affairs of the District. Congress has ultimate authority over budgetary decisions made by the District, and congresspeople occasionally block the District’s budget from being enacted without provisions they favor. One such incident occurred in July when a representative from Kentucky attached an amendment to the bill funding the District which prohibited the use of city funds to enforce the city’s gun control laws, which are among the strictest in the nation. (The effort ultimately failed.)

Opponents of statehood for the District took an approach contrary to the concise one used by the supporters’ camp. Their objections to Carper’s bill ranged from the fact that buildings such as the Capitol would be dependent on the District for water and electricity, to the claim that Congress does not have the authority to shrink the size of the district, to the need for a repeal of the twenty third amendment.

Supporters dismantled these claims one by one, first citing the Pentagon and the National Security Agency as successful examples of federal government centers being dependent on a state for services. They invalidated the argument that Congress cannot shrink the District by touting the nineteenth century return of Arlington and Alexandria, which were originally part of D.C. to Virginia. They acknowledged the problem associated with the Twenty-Third Amendment, which, if left intact, would mean that D.C.’s three electoral votes would be controlled by the only people still living in the shrunken District: the presidential couple. However, they argued that repeal of the amendment would be relatively easy, as states would be eager to ensure that the President was not given that ability.
The opponents of the bill never brought up the opportunity to statehood that would still grant the District the rights and abilities it seeks; the return of all lands in the District not owned by the federal government to Maryland. This proposal is often touted by conservatives since it would appease District residents and would not disadvantage Republicans by creating two safely Democratic Senate seats. Liberal commentators chalked the omission up to a lack of empathy among Republicans for the plight of District residents, and statehood opponents did not address it in the aftermath.

At the conclusion of the hearing, statehood supporters acknowledged that the bill had little to no chance of being enacted, since it would almost certainly fail in the Republican controlled House of Representatives. They were nonetheless upbeat afterwards, saying that anything that increases awareness of the issue is a step in the right direction.