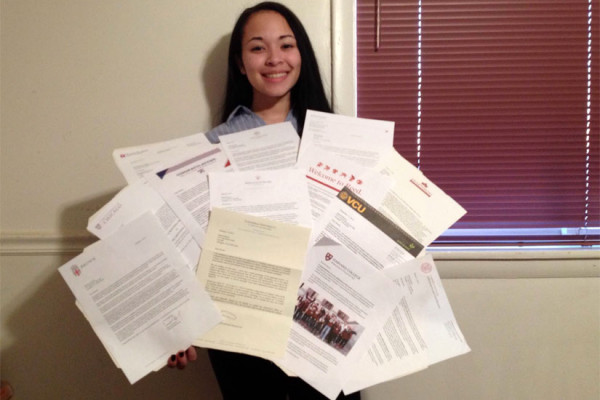 Thomas Jefferson High School senior Pooja Chandrashekar’s hard work and dedication to her academics paid off. Chandrashekar, with a 4.57 grade-point average as well as a 2390 on her SAT, was admitted to all eight Ivy League colleges. Not only was Chandrashekar dedicated just to her school work, she was active in the sciences as well as technology. She designed a smart phone app that detects Parkinson’s disease through speech patterns, with a 96 percent accuracy. Chandrashekar’s acceptance list was not only limited to Ivy Leagues, she was also accepted into six other schools.

While she was wanted by University of Virginia, MIT, Georgia Tech and Duke, Chandrashekar has narrowed down her choices to Harvard, Stanford, and Brown. She intends to enter into a medical program.

Chandrashekar was not the only local Arlington senior who struck gold in college admission Senior Brandi Moore received congratulations letters from all five of The Ivy Leagues she applied to. Moore had already gotten into eight other schools which summed up her list of acceptances with a grand total of 14. “It’s really cool, I don’t really realize how big of a deal it is right now. A lot of people cry when they get their acceptances, but that really didn’t happen to me.”

Statistically, Ivy Leagues are a challenge for any high school student to get into, but Moore was one of the exceptions. She stated, “I totally thought I was going to get rejected by them. I was figuring out numbers wise I wasn’t going to get in because of the competitive acceptance rates. They are below 20 percent.”

Similar to Moore, her family had the same reaction to her acceptances. They had always joked about her getting into Harvard, but never thought it would become a reality. She had already gotten into four of The Ivies and was waiting to hear back from Harvard. “Once we received the acceptance letter, we laughed because we were not thinking I was going to get in,” said Moore. “I never really took Harvard seriously. I applied because my parents really wanted me to.”

Brown had been Moore’s dream school since she was eight years old, but college tuition is a big factor in making her decision. Compared to the other top schools that want her, Harvard offered her the most money. “You say that you have a dream school, but that can change once you see the money. I never really cared about getting into Harvard, but then I got in and the financial aid they were offering me beat out all the other schools,” said Moore.

An Ivy League education does come with a cost. Moore stated, “we were really happy once we saw the financial aid. The cost of attendance is about $60,000 a year. I was under the impression that we would not be able to handle that kind of money even if we did receive aid. It’s really exciting that Harvard is willing to pay. I’m glad it all worked out this way,” said Moore.