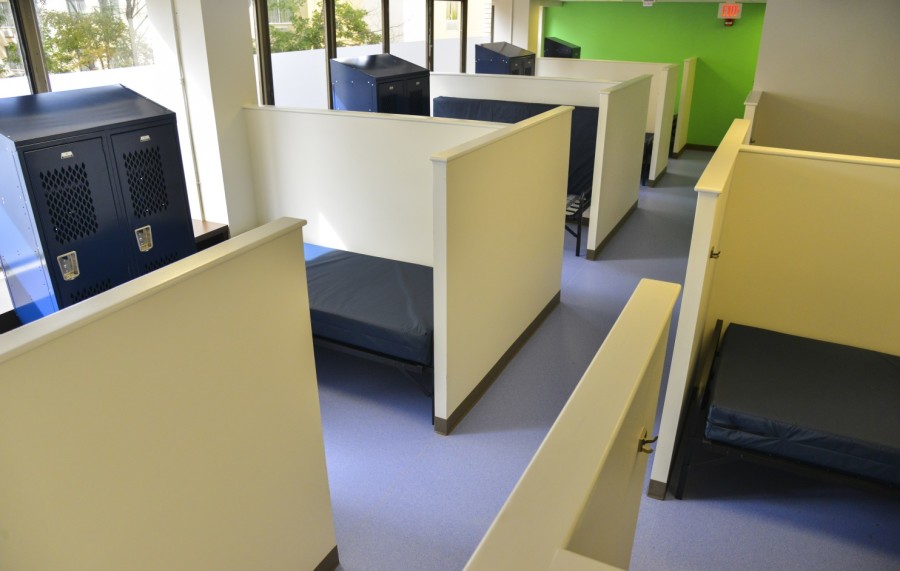 The shleter added as much color as possible in order to make the guests more comfortable and at ease.

As a part of Arlington’s ten year plan to reduce homelessness in the county, a new year-round homeless shelter opened on October 1 to service people who need it. This homeless service center will replace the emergency winter shelter that was previously located in Courthouse.  It will serve as an upgrade from the old facility in many aspects: it will be open 24 hours a day, seven days a week, as opposed to the winter shelter which was only open from 4 p.m. to 9 a.m.

It will also be providing meals and other homeless services.

The new shelter includes 50 beds, 14 for women, 36 for men and 25 hypothermia prevention beds for winter. In an approach to make the shelter more comfortable and welcoming the wall greeting people as they enter to the front desk was painted bright orange. The women’s walls were painted blue with green tile flooring while the men’s walls were painted green with blue tile flooring. Macy’s provided colorful blue and green bed sheets in order to further comfort people staying for the night. The bathrooms have also been decorated with the blue and green theme through the tiling.

With Arlington Street People’s Assistance Center’s (ASPAN) staff of 30, the shelter will be relying on volunteers throughout the year to keep it running. “Not only is this shelter a good opportunity for the homeless of Arlington but it is also a great opportunity for people in the community to volunteer and really connect with one another,” senior Vanessa Dang said. “We live in a high end county and I think it is good for people to learn that people have struggles and that it is vital for us to help one another. The less fortunate many times end up helping the fortunate more than expected.”

The shelter is located across from the Courthouse police station and is near a few Courthouse condominiums. This has raised some safety concerns for neighbors considering the increased amount of foot traffic at night in the neighborhood. Security officials have been hired to watch the building and its exterior as well as having security cameras installed around the perimeter. A-SPAN will try to limit smoking breaks outside to only three or four people at a time and encourages neighbors to contact the shelter with any problems they would like to report. A Homeless Services Center Neighborhood Advisory Committee has been created to for communication between the shelter and neighbors regarding any issues that may occur.

Half of the police departments offices have been trained in crisis intervention techniques in order to help identify and aid any people that may have a mental illness. These illnesses vary from substance abuse to anxiety, which close to one third of Arlington’s homeless population are accounted to have. The shelter will also be providing medical and therapeutic attention to any in need of it.

With this shelter, Arlington hopes to set a good example for other counties to take initiative to combat housing problems across the nation. “There is an affordable housing crisis in the D.C. metro area and across the country. Men, women and children all need a place to go to get their lives together,” minority achievement coordinator James Sample said. “These shelters are needed but they need to be put in different communities in order to not further lower the property values in poor communities.”