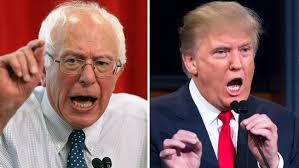 Donald Trump has been the center of attention nationwide for several months as the Republican Party’s frontrunner in the presidential race, due mostly to controversial comments. Meanwhile, on the Democrat’s side of the primaries, Hillary Clinton is leading the field with Bernie Sanders as the runner up. Besides their unexpected success, Donald Trump and Bernie Sanders have only one thing in common: they both have nontraditional views and are seen as being very anti-establishment candidates.

Bernie Sanders holds 25.4 points in the polls but is more than 15 points behind Clinton. He is still being considered a major player in the race. Last week, realclearpolitics.com reported that Trump was leading the candidates in the polls with 23.7 points. He is more than 5 points ahead of the current runner up, Ben Carson, who has 18.4 points. Liberals have been shocked and scared by the implications of his recent rise in poll numbers with many protesting and writing against him. “Trump may be a fun guy, but he does not know the issues at all. It is almost funny,” freshman Sam Sharp said.

It has been argued that Sanders is actually an establishment politician. He has been in politics for almost all of his adult life. First selected as mayor of Burlington, VT in 1981, he was then reelected three times before being chosen as a representative for the House of Representatives in 1990. Sanders served in the House for 16 years before being elected to the Senate in 2006. He was reelected by a large margin in 2012 and has been the ranking minority member of the Senate Budget Committee since January 2015.

Sanders has always run as an Independent. He has become the longest serving Independent in U.S. Congressional history. Sanders is consistently a leading progressive voice on issues such as LGBT rights, universal healthcare, campaign finance reform, parental leave, climate change, income inequality, civil rights and civil liberties. The senator has been very critical of the Patriot Act and racial discrimination in the justice system and was also an early and outspoken opponent of the Iraq War. Most importantly, Sanders is a self-described Democratic Socialist. He favors economic policies similar to those of social democratic parties in Europe.

Given his far left views, many voters and students have been surprised by his success. “Probably some people like socialist ideas,” Freshman Patrick Warner said. “Some people just do not like Hillary, so they want to vote for anyone else. Some people think strict Capitalism is not working, so they think Bernie Sanders and his Socialist ideas might work for America. I think he is a great and such a smart candidate, but I would be shocked if he managed to win.”

Trump is currently a member of the Republican party, but in the past identified himself as a Democrat and has given generously to Democratic candidates. He has never held a public office and it is unclear how he will go about implementing his ideas if elected. These ideas include sending all undocumented immigrants back to their home countries and making them immigrate legally, getting rid of gun control and eliminating taxes on corporations. He also has consistently received outrage for making statements that are seen as extreme and rude.

As with Sanders, Trump’s success has been unexpected. When he started running in July, many statisticians predicted his candidacy would be short-lived. His opponents did not see him as a threat, but now he has clearly stated that he is in the race to win. “The only reason I can think of to support him is that he’s appealing to a lot of people’s anger and frustration with our government right now,” freshman Will Carlson said. “While he’s not the best option at least people feel like they can trust him.”

It is predicted that neither of these men will be elected as the next president of the United States, but the support they have gained gives a statement about the feelings of the American people. It says the people want to see a leader who is “one of them.” This is also why Ben Carson, a neurosurgeon by trade, has been doing so well in the polls. This anti-establishment push is not a new feeling among voters, but in this election it has lead to more extreme results than usual.

While many citizens are concerned about the possibility of a completely inexperienced or radical leader being elected to the highest office in the country, a lot of citizens are still interested in a fresher more honest leader. Freshman Aidan Holland said, “I have found this election very refreshing. It’s been so entertaining, and I feel like most of the people running have been much more sincere.”