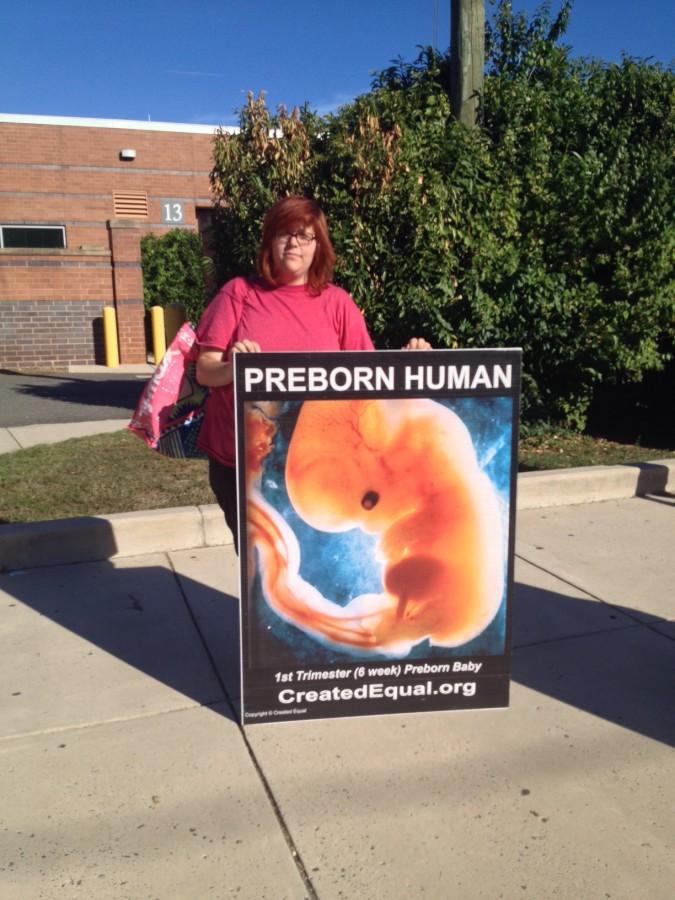 Activist Lauren Handy outside of the school building.

Activist Lauren Handy stood on the edge of Stafford Street outside the school building last Wednesday, brochures in hand, with a poster of an unborn fetus and the words “Preborn Human” boldly printed across the top. Others were with her in her protest, standing quietly along the sidewalk in front of other signs showing graphic images of aborted fetal babies. “We’re showing victims of abortion and passing out literature on Planned Parenthood,” Handy said.

Handy works for multiple anti-abortion organizations, including Survivors of the Abortion Holocaust, Created Equal, Anti-Choice Project: DC, Surrendering The Secret and Abortion Free. The protests were not coordinated by any one organization. “[We are] just a group of locals coming together,” Handy said. “[We are] pro-lifers in the D.C. metro area.”

The brochures Handy was holding were published by the Human Life Alliance, a foundation that “promotes awareness of the inherent dignity and personhood of human life, born and preborn, without exception or compromise,” as stated on their website. Handy referred to the posters of aborted fetuses she was displaying. “If you believe that the unborn are human, then it is only logical to show the victim of an injustice,” she said.

As Handy stood on the sidewalk, students walked past, glancing at the images the protesters were exhibiting. The posters uninhibitedly showed pictures of aborted fetuses with gorey heads separated from bloody bodies and tiny skeletons lying on metal tables. Many students stopped to oppose the protest, some raising their voices against the demonstrators. One student yelled out his car window as he was driving by.

“I’m not shocked [by the opposition], and I also don’t take it personally,” Handy said. She went on to say that she has protested at hundreds of high schools around the country, at one point being “unconstitutionally arrested” for her protests. “[Opposition] encourages dialogue,” Handy continued. “Abortion is a sensitive subject. People have a passionate response.”

Sophomore Becca Scheafer was one of the opposers of the protest, holding up her jacket in front of one of the more graphic signs to cover up the image. “I don’t do that well with gore,” she said afterward. “I chose that poster primarily because of the gore, but I also just disagreed with the protesters in general. I believe in a woman’s right to her body, and having people shaming them for that is just disgusting to me.”

The protesters defended their posters. “If we go back to the Civil Rights movement and remember Emmett Till, we remember that he was on all the front pages of the newspapers,” Handy said, alluding to an African American teenager who was brutally murdered in 1955, and whose mutilated body was shown across the United States through printed media. “It sparks outrage. Pictures start social change.”

Aside from the student retaliation against the demonstration, no authorities came to end the protest. The demonstrators were within their rights to protest: they had free speech, and where they stood (the sidewalk and the grass bordering the street) was public space.

“It’s not uncommon for there to be protests at or around local establishments such as schools,” administrator Ms. Claire Peters said. According to Ms. Peters, the administration did not interfere with the protests. “They did bring some signs that were fairly graphic. If it was in my world, I don’t know if that would be appropriate for a school setting, but it does fall underneath their right to free speech.”

While there was much opposition to the protests, there were also some students who agree with the protesters. Sophomore Evelyn Smith is committed to her pro-life stance based on her religion. “I think what they’re doing is great because, as a Christian, I believe abortion is wrong in all cases,” Smith said. When she heard about people covering up the signs, she reacted negatively. “I think [covering up the signs] is weird. You need to let people see the truth in a sense. You’re not letting everyone see what is actually happening to the babies, to the people who are not able to speak for themselves.”

At the end of the day, Handy stands firmly beside her beliefs. She also insists that if anybody is having any trouble with abortion, they should seek help. “There are girls who have had abortions at this school,” Handy said. “I just want to stress that there is hope and healing and organizations where they can get help.”