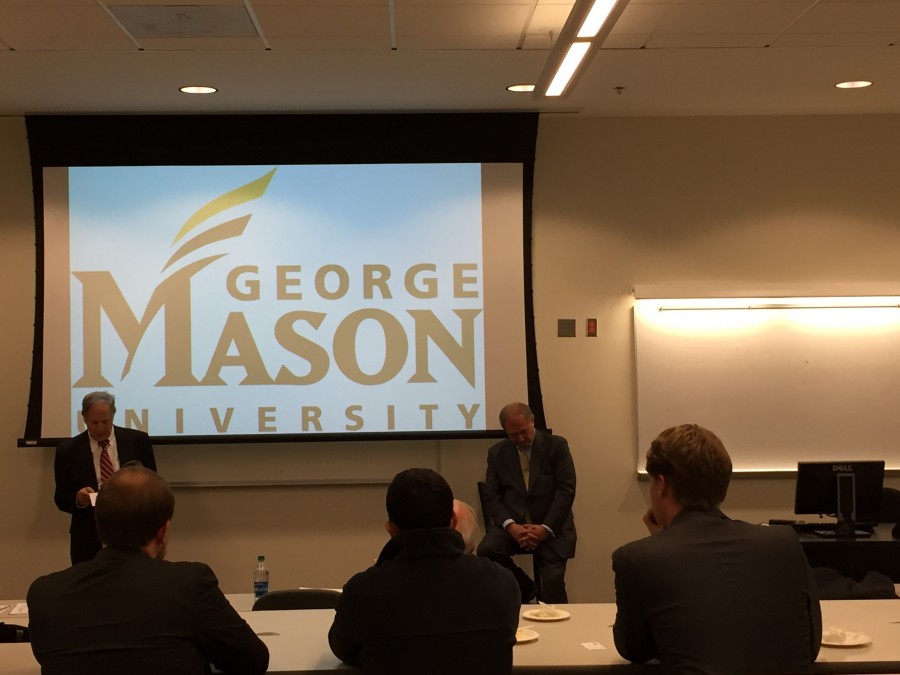 The night started with Gov. Gilmore expressing his remorse about how the current presidential race was too focused on poll numbers and how people are doing rather than what their policy and experience was, that in theory, propelled them to where they are. Accordingly, Gov. Gilmore then explained how he was strategically not going to participate in the Iowa caucus due to the large sums of money it took to run competitively in a caucus state,“getting voters to spend a day at what is a town hall meeting is an extreme drain on funds,” he said.

He touched on how he plans to win the campaign by winning strategic victories in New Hampshire and Virginia. Given his low poll numbers, Gilmore justified his run by saying that “Trump currently has a lid on his campaign” referring to the assertion of many political scientist that Trump is extremely unlikely to win a primary election because he can only capture at most 40 percent of the Republican base. “I thought Romney was going to run but then Bush scared him off.” Gilmore said. “I don’t know how, but he did, and he’s not the moderate America needs.”

He later dove into his economic policy starting off by saying, “ I don’t care what anyone say’s our economy is not good, when 47 percent of our college graduates cannot get jobs, we do not have a good economy.” His solution was to end regulations that “strangle businesses,” lowering the corporate tax rate to 15 percent and end the death tax. “Our capital gains and endless regulation of business has made us non competitive and has created lost angry generation that is frustrated with stagnant wages,” he said.

With regards to climate change Gilmore offered no resolve. “The EPA has overreached its bounds and is strangling our economy,” he said. In response, I asked him if he would support a revenue-neutral carbon tax, tax profits from carbon are used to relieve corporate taxes, as it has shown to be successful in Ireland. “I do not support the use of taxes to incentivize any type of behavior and therefore have no support for a Carbon Tax.”

On foreign policy Gilmore said, “I am not a neo-con, but I do believe in peace through strength.” He, however, did seem to share the same plan for ISIS as Obama in his use of airstrikes, support of local forces and special force attacks on high-level targets saying, “I believe that anytime the enemy is able to draw you a situation where you cannot win but he can continue to hurt you, you are losing.”  Gilmore’s most radical suggestion was for a “Middle-East NATO” to be formed. “We need to have an allegiance of friends that can contain Iranian influence in the region much like the European NATO did with the Russians,” he said.

Gilmore ended with closing remarks on his candidacy and the race in general. “The Republican party needs to stop alienating groups of people,” he said. “There is no reason we should not be able to win the hispanic vote, immigrants believe in hard work, that the best welfare program is a job and that in America, through hard work and risk-taking, anything is possible.” He then showed his sympathy on the issue. “Shipping them off in boxcars makes no sense, if they come forward, have not broken the law and have been here over a year, they should be able to stay but not gain citizenship. That would give them amnesty, and the American people do not want Amnesty,” he said.

His final remarks came back to his core; why is running. “My country is in a dreadful situation, and as a capable American, I cannot sit back and do nothing about this situation.”