Mostly favorable reviews on President’s last State of the Union 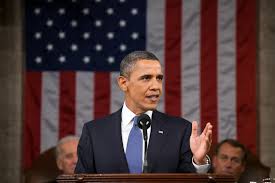 President Obama delivers his State of the Union speech.

President Barack Obama delivered his eighth and last State of the Union address at the chamber of the United States House of Representatives on January 12. The address was broadcast live on the White House YouTube channel, as well as the White House website. A written copy of the speech was also posted on the White House website. He ended his speech saying, “And that’s why I stand here confident as I have ever been that the State of our Union is strong. Thank you, God bless you. God bless the United States of America.”

The President listed proposals for the year ahead, per tradition. They included many controversial ideas such as implementing paid leave, and raising the minimum wage. He shared other ides like helping students learn to write computer code, personalizing medical treatments for patients, and fixing what he called a broken immigration system. As well as new ideas on how to protect US children from gun violence, achieve gender equality through equal pay for equal work.

Many people were excited by the proposals made, and Overall, 53% had a “very positive” reaction to the President’s speech. “I was really happy with Obama’s proposals. I know that he won’t deliver another speech like this, but I believe that this was a really great start to his last year,”  junior Jillian Roberts said. “I hope that everything he suggested gets to happen in the coming year.”

The speech was met with deeply positive reviews, matching the best ratings for any of his State of the Union addresses, according to a CNN/ORC instant poll of those who watched the speech. Many critics claimed, mostly from the Republican side of the political aisle, that Obama’s speech was filled with false promises and unwarranted optimism. But still, many other outlets like The New York Times and The Washington Post praised the speech for its long term vision.

The speech was seen as the beginning of the end of this presidency, but it was generally seen as a strong one. “I didn’t actually see the State of the Union when the president gave it, but I read a lot of articles written on it,” freshman Sophie Lent said. “While they weren’t overwhelmingly positive, it seemed like a fairly respectable response to the speech. I think it’ll be a good jumping-off point for Obama’s final year in office.”