The Role of the Writer event engages young authors 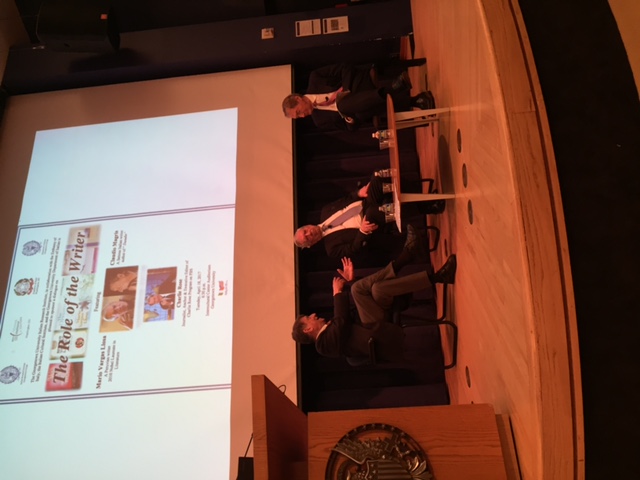 Georgetown University’s Italian Research Institute hosted, “The Role of the Writer: a Dialogue,” in the Intercultural Center Auditorium on April 18. With Peruvian writer Mario Vargas Llosa, recipient of the 2010 Nobel Laureate in Literature. According to the Nobel Institute, the award was given to him “for his cartography of structures of power and his trenchant images of the individual’s resistance, revolt and defeat.” Apart from having written many novels like, “Aunt Julia and the Scriptwriter,” and “Conversation in the Cathedral,” (which he considers his best work), Vargas Llosa is a essayist, journalist, college professor and politician.

The dialogue at G.W. also featured Italian writer, scholar and translator Claudio Magris, author of many novels which include, “Danube,” “Microcosms,” and most recently, “Blameless.” The dialogue was moderated by Charlie Rose, former Georgetown Alumni, who is currently the anchor and executive editor of “Charlie Rose,” a nightly one-hour program that features conversations and discussions with distinguished men and women.

Vargas Llosa and Magris’s passion for reading and writing was evident at the event right away, as they answered Rose’s first question, “Why do you write?” Vargas Llosa put great emphasis on a novel’s capacity to seduce a reader and broaden their horizons, talking about how he remembers the first book he read when he was five and how it changed him forever. Magris agreed with Vargas Llosa and even talked about how his novels changed him. Among the topics covered, they discussed a writer’s role in politics, the purpose of a book and impressed the audience when they talked about how they both write their novels by hand. When asked by Rose about his nationality and how it shaped his novels, Vargas Llosa admitted that the question made him uncomfortable, stating, “Literature is universal, or it is not literature,” which elicited applause from the audience.

The event ended with a Q&A from the audience, which filled the room to its full capacity and even had some people standing on the sidelines and sitting on the steps. Both Vargas Llosa and Magris’s novels are available in the university’s bookstore and any information about upcoming events hosted by the Italian Research Institute can be found in the following website: http://italianinstitute.college.georgetown.edu/UpcomingEvents