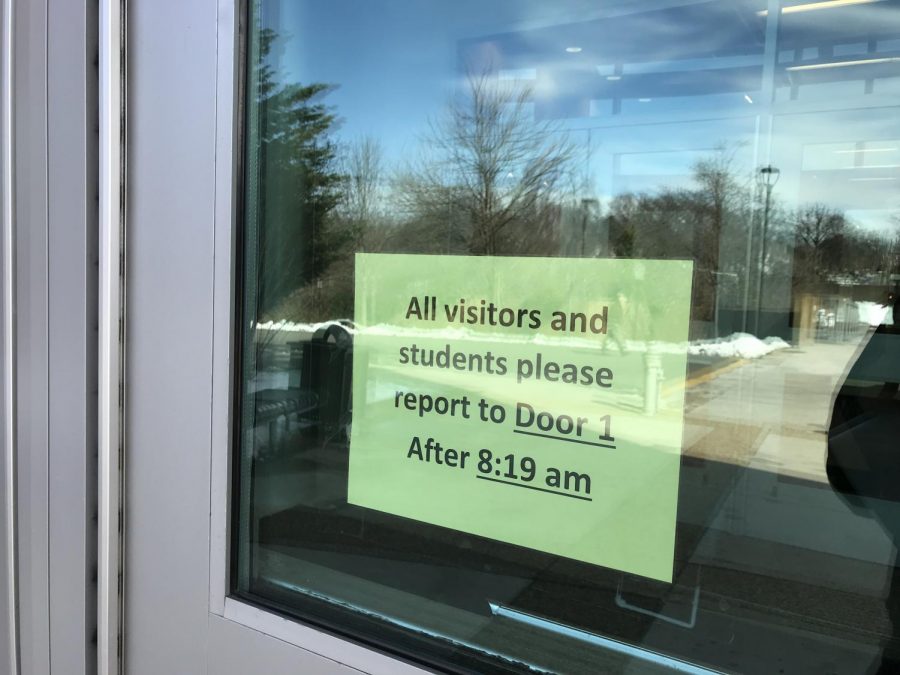 New signs were posted on the school doors explicitly stating the directions for visitors.

Since the Parkland, FL shooting, there has been a surge in conversation regarding school safety. There is no doubt that the main goal is to keep everyone as safe as possible, but how this goal is attained is where things get complicated. The school has always aimed to protect its students and staff and have made an increased effort to do so since the loss of the 17 victims in February.

Talk of arming teachers has been flooding the media, and some students may be concerned that their teachers will one day be carrying guns on school grounds. However, the Arlington School Board sent an email out last week explicitly stating that they do condone arming their staff.

“We respect our teachers and do not support arming them,” the email stated. “Instead, we will focus on providing them with the tools they need to teach our children and support the Whole Child.”

Additionally since February, small improvements have been made to address the safety of the building. For example, new walkie talkies for the administration and safety staff are now able to directly call 911 in the case of an emergency.

On Monday, the school also stated that it intends to announce if there is a drill or a fire in the building when the fire alarm goes off. This is most likely because the shooter in Parkland pulled the fire alarm to displace students and staff, making them easier targets.

New security and precautionary measures have also been implemented regarding the protocol for entering the school. According to an email from Assistant Director of Student Activities Justin Bolfek to all staff, the exterior doors now remain locked until 7:00 am. Doors One and Five are unlocked for students entering for AM Zero period classes, however, they are now monitored by staff members. In addition, people can no longer get buzzed in at Door Five, located next to the main office, and an access card must be utilized.

For those who do still not feel safe, the administration encourages students to talk to somebody, preferably the school resource officer or a counselor. Their hope is that students do not fear coming to school.

Nonetheless, some students are still on edge. Sophomore Darsey Trudo believes students must utilize their privilege of living in such close proximity to the government and stand up for school safety.

Trudo continues to make her voice heard and protested at the Capitol after the 17-minute walkout on Tuesday. “Living in Arlington, I feel as if I am in a protected bubble, but there is a sense of uncertainty now,” Trudo said. “I’m sure Parkland felt like they were in a bubble as well.”

When asked about the saying “see something, say something,” Principal Dr. Gregg Robertson explained that it means that students should intervene whey they see something suspicious. Ideally, he said, they should report their suspicion to an adult or the school resource officer first.

“Look out for somebody who doesn’t look like a student,” Dr. Robertson said. “[If] you do not see a badge, stop that person.”

Although the administration is pushing for more security, they can only prepare to a certain extent. Their objective is to to ensure the safety of the school, but they realize that some things just are not in their control. “There is no school in the country that is 100 percent safe,” Dr. Robertson said, “but our goal is to make it that way.”