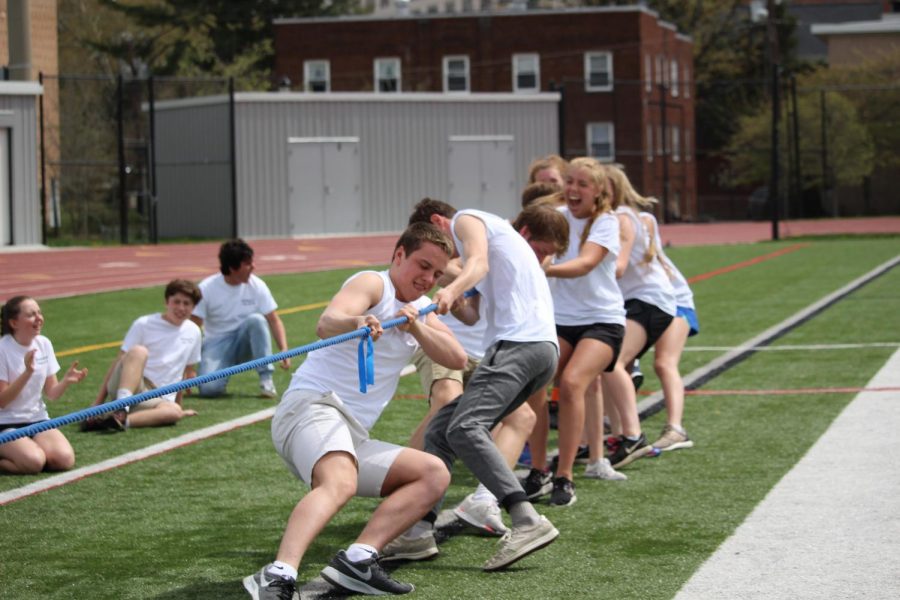 The sophomores work hard during tug of war.

The school’s Student Council Association (SCA) held their annual SCA Olympics on Monday, April 23, after being postponed due to weather. Although the seniors took first place, each grade’s team members remained focused on the competition throughout the events. The faculty came in a close second, and three teachers were pied by SCA members.

Activities included hula hooping, tug of war, relay races and a donut-eating competition. The athletes said they chose to participate because they’d had good experiences in the past or had heard it would be entertaining.

“It’s kind of about just doing it for yourself and about having fun,” freshman Emma Weaver said, participated in the jump rope and wheelbarrow races.

Other students were more experienced in this event. Although the senior fan section was minimal, the class put up a fierce fight against their rival teams and came away with the overall Olympic win. Senior Leonie Alder, who won the hula hoop competition for the third time, was happy to return to the games. “It’s kind of my thing,” Alder said. “It’s fun to compete, and it’s way more fun to be in it than watching. You get to hang out with people on the field.”

Many students took the SCA Olympics very seriously and enjoyed the competitive nature of the games. “[Being competitive] doesn’t translate into me winning, but I still try really hard,” junior Neeka Samimi said. “It’s a point of pride for us.”

The SCA also used the Olympics as a chance to raise money. They fundraised by asking students to vote on which teacher they wanted to be pied, and each donation served as one vote. Among the unfortunate teachers was Ms. Petty, a health and P.E. teacher. “I’m so jazzed,” Ms. Petty said. “I can’t wait to get pied. I’m probably immediately going to my office afterward to clean off my face.”

Of the many events in the Olympics, some were more popular than others. Students often enjoyed watching teachers get pied, and the crowd got loud during the tug of war. “My favorite part is whatever event I’m in,” Samimi said. “[In] the lead-up [and] ‘till after that, I like it when I get to watch other people do their events and kind of just make fools of themselves a bit.”

The organizers of the event began planning before Spring Break. SCA members could be seen on the sidelines of the field pointing participants in the right direction and announcing results to the audience.

“We’ve been working really hard,” freshman Emma Huther said. “We got set back a little bit because of the rain and the postponing, but we’ve been doing really well.”

Participants were collected in a variety of ways, including volunteers found on Instagram as well as a little peer pressure from friends. “For freshman, they went into GPs and got people nominated to participate, so it’s a collection of motivated freshman who are participating,” freshman Shea Messman said. “The ones who said that they would do it are here today.”

Lots of students enjoy watching and competing in the Olympics. It has become a classic element of the school’s Spirit Week. “My favorite part of Spirit Week is definitely the Olympics,” Samimi said. “A lot of people don’t come, which is unfortunate, ‘cause it’s a hidden gem of the school.”