The wheels on the electric bus go round and round 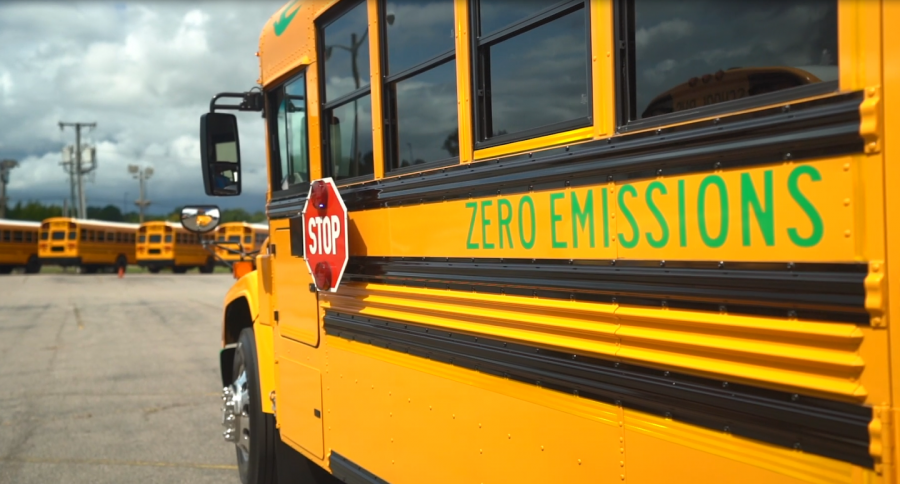 With help of Dominion Energy APS will be gaining two electric school buses next school year.

Over the years, Arlington Public Schools (APS) has made efforts to go green through many initiatives, including the many schools which are now partially powered by solar energy. Now, APS is starting a new project, electric school buses.

“Diesel buses are horrible for the environment—they put out 54,000 pounds of greenhouse gases,” Peggy Fox, media and community relations manager at Dominion Energy, said. “Replacing those diesel buses with electric makes the air and the environment cleaner.”

APS is not taking this on alone. Dominion Energy, a power and energy company based in Virginia, is helping out. They have selected APS, along with 15 other localities in the state, to each receive a few of these buses. Electric buses are about three times more expensive than diesel buses, which is largely a part of why APS has not added electric buses previously.

There are many benefits to these new school buses. As with all electric vehicles, these buses will have zero-carbon emissions. Despite these new buses being more expensive, it is projected that APS will see a decrease in maintenance costs. According to Dominion Energy, electric school buses last longer and require less maintenance than diesel buses. They will also be safer for students.

To start, Arlington will be receiving two electric buses. However, there are high hopes for the continuation of the program. By 2030, Dominion Energy is hoping to have replaced all of Virginia’s diesel school buses in their service area with electric ones, and they are hoping to be halfway there by 2025.
“Ultimately, I would like to be charging our buses, just like we are with some of our schools, with solar energy,” Assistant Superintendent Mr. John Chadwick said. “But that’s some way off.”

Students say they are the ones who will have to deal with the effects of climate change later, so many are eager to take strides towards reversing the effects now.

“[Having electric school buses] would make me want to ride the bus even more because I would know that I was helping the environment,” freshman Carolyn Bohnert said.

Through this endeavor as well as future ones, school officials are hopeful that Arlington will continue to go green.

“Anything that we can be doing to reduce or mitigate the effects of climate change, we need to do it,” Mr. Chadwick said. “It’s a really, really, really serious concern for the whole world.”