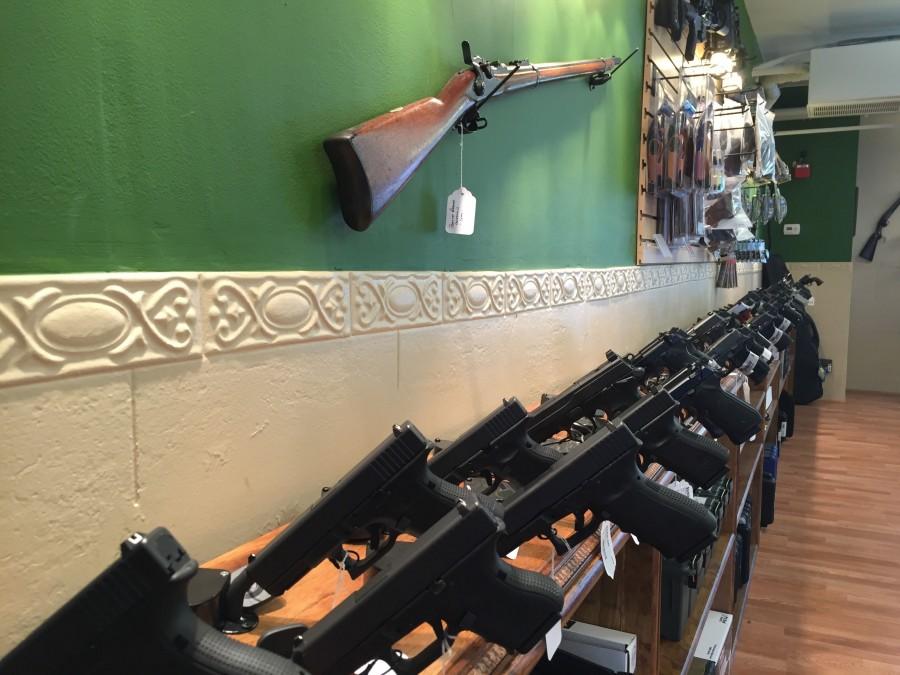 There’s a heated debate going on in the “People’s Republic of Arlington” a name given our county for it’s overwhelmingly liberal citizenry. On one side, there is the gun-selling father daughter management team of Lauren and Dennis Pratte; on the other, a petition-wielding community of activists from Lyon Park. The subject, NOVA Armory, a new gun store that opened across from Fort Meyer selling everything from hunting rifles to class iii machine guns with silencers.

Arlington has a history of driving gun stores out of their town, with NOVA Firearms being driven out of the Cherrydale neighborhood before opening last may. However, this time, the fight may be harder, as the landlord is not budging on its decision to grant NOVA Armory a lease, unlike in the Cherrydale case. The main opposition is a group called Act4LyonPark, an advocacy group for the lyon park neighborhood, where the Gun Store is located. Their main tactic is an online petition with 3,460 supporters which  calls on the owner of the building to “exercise concern for the community, and most particularly its youngest and most vulnerable residents, and cease any action that would allow a gun shop to occupy this space.”

State delegates Patrick Hope, Alfonso Lopez, Richard Sullivan, and Mark Levine as well as state senators Barbara Favola, Janet Howell and Adam Ebbin have wrote a letter to the landlord expressing their concerns about the gunstore. In response, Pratte sued 64 people including all of the elected officials as well as community activist for: $69,041.14 in lost revenue $1,000,000.00 or such amount as may be proved at trial representing the present value of the diminution of the future income stream over time; $5,000.00 physical and personal protection expenses; $24,300.00 in lost opportunity costs due to the inability to attend to other profitable activities; $100.00 Phone number change due to harassment and stalking behavior by the defendants; $3,000.00 time lost related to employee having to effect phone number change and related costs; and $1,000,000.00 in general damages by reason of the injury done to the business’ goodwill and reputation.  The lawsuit alleges that their “intentional, willful and malicious acts in acts in their conspiracy to injure the plaintiff’s business and reputation,” that includes “death threats made to a sixteen year-old girl [Lauren Pratte]” among other things.

Interestingly enough, if you read the lawsuit, I believe it is probably the best showcase of what is wrong with both sides of this fight, it begins with the allegations that the letter should be considered an abuse of the respective officials power as it was printed on state stationary with the seal of the Commonwealth. The law states “5 CFR § 2635.702. An employee is further prohibited from using her Government position or title or any authority associated with her public office in a manner that is intended to coerce or induce another person, including a subordinate, to provide any benefit, financial or otherwise, to themselves or to friends, relatives, or persons with whom the employee is affiliated with in a nongovernmental capacity.”

It then goes on to say that the letter was defamatory as it stated that “NOVA armory is already marketing aggressively to residents of surrounding states,” and says that the illegal purchase of guns in Virginia and transfer to be sold elsewhere. On these grounds, NOVA Armory is clearly in the wrong as they have a Washington, DC portal on their webpage where they state “We are the CLOSEST GUN SHOP TO DC! Located 1-mile south of DC off Route 50/Arlington Blvd, we have the guns you desire! Our staff has extensive experience selling firearms to DC residents, law enforcement, military, elected officials/staffers, and Embassy personnel & security teams located in DC. We can assist with all the necessary paperwork.”

This brings up the larger issue of lax Virginia gun laws in general, the officials are right when in their letter they say “in the 1990s Virginia was known as the Gun-Running Capital of the East Coast.” Virginia gun exporting has become so bad that the State is ranked 3rd in Guns used to commit a crime in another state with 2,557 crime guns in 2009, and is responsible for one in four guns in New York City. In defense of NOVA Armory, to buy a firearm from them you have to fill out many forms while only a mile away at National Pawnbrokers all you need to provide by law is date of birth, sex, race, and name which is put into a quick criminal background check.

The suite then alleges “The defendants have characterized themselves as ‘protesters,’ though nothing they have done in connection with their attempt to destroy the Plaintiff’s business was done in the attempt to petition the government for redress of grievances. Instead, they have merely been disruptors, attempting to destroy the Plaintiff’s business and reputation, stalking the store with signs, parking cars covered with documents referring to horrible deaths, attempting to coërce and intimidate tenants of the same facility, etc.”

Consider that statement for a second, the dictionary definition of a protester is, “a person who publicly demonstrates strong objection to something; a demonstrator,” the suite just said they were not protesters and then described the act of protesting. Additionally, the suite says nothing was done in the attempt to petition the government for redress of grievances and was only to disrupt his business, yet if you recall, the letter sent by the delegates after the community petitioned the gun store, is also brought up in the lawsuit as “an abuse of official authority.”

The suite contradicts itself again when it says “The letter was defamatory in that it asserted that the plaintiff had opened it’s business to conduct criminal activities,” but later quotes the letter as evidence when it reads “we want to make you are aware [sic] of the potentially unintended consequences a firearms retailer will have in this particular location.” Once again, this contradicts itself, if it asserted that the plaintiff opened it’s business to conduct criminal activities, it would not use the term, “potentially unintended consequences.”

The last charge in the suite in against Mark Levine when he says numerous things about NoVA Armory, mainly, a strongly worded Facebook post about how he is not welcome as well as on twitter stating “All someone has to do is be from Virginia, buy a bunch of guns, and sell them to a DC gang member from Arlington if the Armory opens here.” Which the suit alleges show,  “the upper-middle and professional class suburban Virginia neighborhood is worried about is the presence of “undesirables” taking the Metro subway into their lovely Lyon Park neighborhood from the other side of the Anacostia River, buying guns and dealing drugs.” Which, honestly, he does have a point, I assure you if these statements were made outside the context of NoVA armory, this same community would call it “racist.” If you don’t believe me, the only other time the community was so aggravated, was when Key School in Lyon Village turned to Spanish immersion, which would bring “undesirables” into their neighborhood, resulting in them suing the county.

The rest of the suit recounts the charges against the defendants. In my opinion, both sides of this issue need to be more realistic and open-minded about this issue. In the case of the plaintiff, the business should realize when it came into “The People’s Republic of Arlington” that is was going to be met with aggression, and it should realize that you cannot get rid of the community by suing them, calling them names and otherwise ignoring their concern. In addition, you cannot get red in the face screaming about the people’s second amendment rights and then sue them for practicing their first amendment rights.

On the side of the defendants they need to realize: that they are not going to get a landlord to somehow rescind a legal document that has already been signed,  get Mr. Pratte to reconsider his decision to open a NoVA Armory, realize you can already buy a gun from National Pawnbrokers and Dicks sporting goods , that he is by no means the only gun store inside the beltway and that Mr. Pratte is opening his business because he believes that there is a market in Arlington that he can be competitive.

If the community does not support NoVA Armory, it will go out of business, even if these customers include DC Residents, protestors to the gun store must provide some explanation for why Mr. Pratte’s store specifically poses more of a threat than any other inside the Beltway. In the words of Robert Louis Stevenson, “Compromise the best and cheapest lawyer.”