How your feed influences your politics 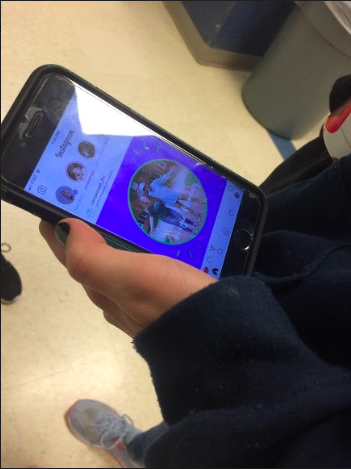 A student opens her instagram feed to access a familiar and steady stream of information sources. Little does she know her feed is different from that of someone on the other end of the political spectrum.

From the government shutdown to the black-and-white optics at the State of the Union address, the political divisions in the United States right now are clear. While polarizing figures in Washington, D.C., are at least partially to blame for the rift in American society, other forces like the news and social media may be keeping us entrenched on our respective sides of the aisle.

On the Wall Street Journal’s website, journalist Jon Keegan does a segment called Blue Feed, Red Feed, where he shows what a Facebook feed looks like for a liberal (the blue feed) versus a conservative (the red feed). The site is color coded: the blue blocks are the blue feed, and the red blocks are the red feed.

“The content is pulled automatically from [news] sites’ Facebook pages once an hour,” Mr. Keegan said on his website. “If a news source appears in the [liberal] column, its links were frequently shared by Facebook users whom researchers classified as ‘very liberal.’”

The algorithm finds the most shared and liked posts between ‘liberal’ and ‘conservative’ pages. To appear on Blue Feed, Red Feed, posts must have at least 100 shares and come from a source with at least 100,000 followers. Seeing the columns side by side, the feeds look very different.

On February 7, the headlines read by and shared among liberal networkers were: “BOOM! The top Democrat on the intel committee put the president back in his place with a snappy comeback,” from Occupy Democrats, “Under Donald Trump’s tax giveaway to the rich, not only will Netflix pay nothing in federal income taxes, it is on track to receive a $22 million tax refund from the IRS this year,” from Bernie Sanders, and “Trump’s new version of ‘Witch Hunt,’” from MSNBC.

On that same day, the headlines that were read by and shared among conservative networkers were:  “Trump defends sanctity of ‘every life’ at National Prayer Breakfast,” from The National Review, “What Trump pulled off at the State of the Union,” from Rush Limbaugh, and “Schumer smirks as Trump describes NY law allowing ‘Baby to be ripped from mother’s womb moments from birth,” from CNSNews. “I think in politics it is very polarizing right now the democrats don’t want to help the republicans’ agenda and the republicans don’t want to help the democratic agenda so until we see the other person’s side of the story we’re going to be at a stand still,” said Ms. Robins, a former government teacher and current history teacher for the school.

While Blue Feed, Red Feed looks at Facebook, the same tendencies may be found on Instagram, Snapchat, Twitter and other social networking sites. “I watch Stay Tuned NBC News on Snapchat every morning,” freshman Mia Bojdzievski said. “I do believe it is more liberal.”

Likewise, those who tend to get their news from a single source are likely to hear a biased perspective. “If you don’t get your information from an unbiased source, then you might get the wrong information,” said freshman Shea Geanu-Pasha.

President Donald Trump has famously talked a lot about fake news. Keegan’s findings may support this point. “If fake rumors are being spread [about someone in an important position] and it is posted on social media, it can cause a lot of distrust between the people and their government,” freshman Amina Luvsanchultem said.

There are many ways to sidestep news bias- especially in social media. The most important thing is to be aware of news bias, both liberal and conservative. Also, consume news from a wide variety of sources will increase the understanding of all sides of issues.

Better yet, avoid using social media as your news source altogether and. Read a good old fashioned newspaper- or three- and educate yourself fully on the topics dividing our country. “It’s going to be really difficult to compromise or communicate [with the other party] if you’re only looking at your side of the story,” said Ms. Robins.