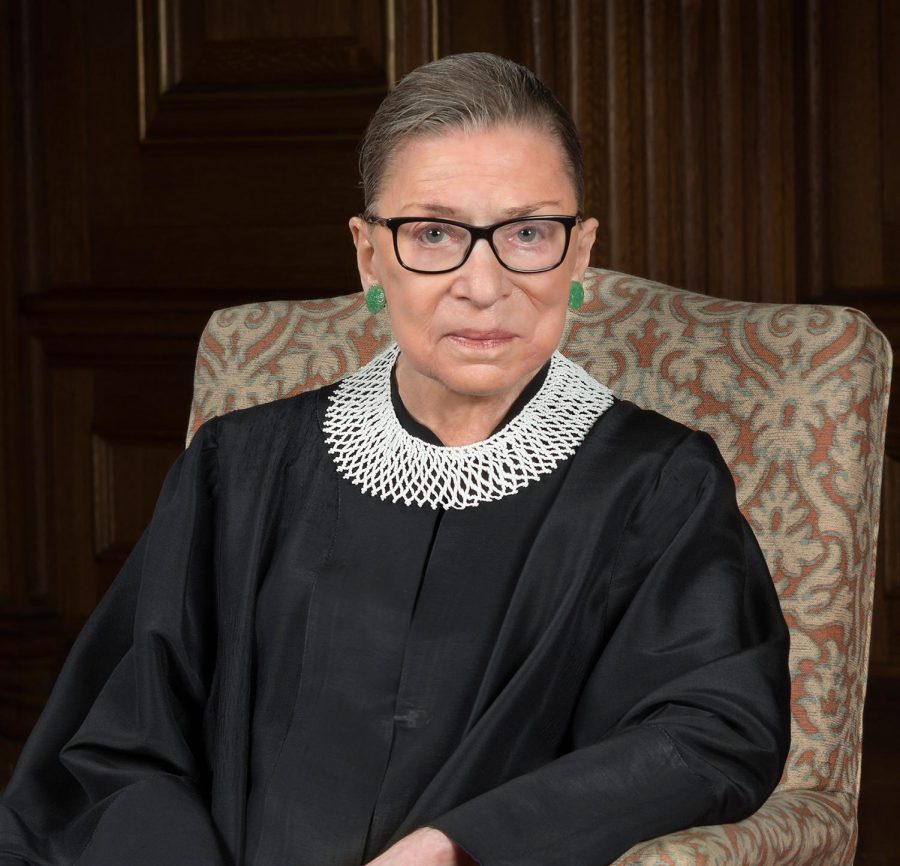 Supreme Court Justice Ruth Bader Ginsburg wearing her favorite collar. She often wears her collars to express her views and has different ones for majority and dissenting opinion.

She walks up the steps in a deep blue coat, beaming into the camera. Ruth Bader Ginsburg’s brief cameo at the end of the movie “On the Basis of Sex,” which tackles telling her story, was for me the most powerful moment in an incredibly compelling movie.

The movie begins with Felicity Jones, who plays Ginsburg, wearing a similar deep blue dress which makes her stand out in a crowd of suited men. She is attending Harvard Law School, a school that then enrolls nine women and about 500 men. Sexist questions and remarks–such as catcalls when she was walking down the street with her daughter to job interviews–are continually leveled at Ginsburg. While endemic sexism prevents her from being hired at a law firm, she eventually attains a job as a law professor at Rutgers University where she holds discussions with her students about gender equality. Both her students and her daughter, Jane, urge her to take further action to further women’s rights.

Ginsburg’s rise to action begins when her husband, Marty, gives her a tax case to look over which was very discriminatory toward both genders. The case concerned Charles Mortiz, a man who hired a nurse to care for his mother while he worked. He was denied a tax reduction for the nursing care due to a law that stated that the reduction was limited to women, widowers or divorced men. This gave unequal rights to men on account of the idea that a woman’s primary role is as caretaker. The rest of the movie follows Ginsburg as she takes up his case and argues against it in front of the U.S. Court of Appeals.

Throughout the film Ginsburg battles for gender equality and equal treatment for women. Despite this goal seeming unattainable at times, her perseverance and dedication never waver.

Although no movie can perfectly encapsulate the struggles Ginsburg endured and her strength, “On the Basis of Sex” did an excellent job.

The objective was to show how Ginsburg began to advance gender equality and women’s rights, and the movie itself, along with the 2018 documentary RBG, are examples of the progress made in these areas.

Women are increasingly being viewed as heroes. Historically, despite oppression, female heroes have always emerged, although they were not always seen as such. While there were few commemorations of Harriet Tubman and Susan B. Anthony during their lifetimes, they are now seen as among the most influential and courageous American women.

Ruth Bader Ginsburg had to work incredibly hard to get the recognition and respect she deserves and is finally being honored for all her heroic works. She has become a pop culture icon, being crowned the Notorious RBG, a play on the rapper Biggie Smalls’ nickname Notorious B.I.G, and portrayed on SNL by Kate McKinnon who, while being extremely humorous, still exhibits the tremendous and incredible force that is Ginsburg. Advancements she has made in the women’s rights movement contribute to how women are viewed differently today.

Now powerful political women, such as Representative Alexandria Ocasio-Cortez and Speaker of the House Nancy Pelosi, are being recognized for what they are: heroes. Outspoken women who refuse to be treated differently because of their gender and who embrace their femininity in a field that historically didn’t allow for any are the female heroes of today.

Comparisons of Hillary Clinton to “Game of Thrones” Queen of Dragons Daenerys Targaryen exemplify how strong women are now viewed differently than they were in the past. “The Nightly Show’s” Larry Wilmore drew similarities between the two when he compared their right to a throne that was stolen from them.

“I think not that long ago men were viewed as heroes because they were characterized as strong and tough while women were characterized as weak and quiet,” junior Ellie LaMantia said. “Even the classic superheroes consisted of mostly men. I am glad that as a society we are taking the steps to recognize more women as heroes. I think it is another step toward gaining equality, and I’m all for it.”

Now the opportunities available to women have expanded massively leading to more heroic women. Tennis star Serena Williams is a huge inspiration to athletic women and girls, proving to the world that women are just as strong as men. “The Good Place” actress and activist Jameela Jamil has made great strides in raising awareness about eating disorders, she also advocates body positivity and abolishing societal emphasis on women’s looks. J.K. Rowling, the genius creator of the “Harry Potter” series, which consists of powerful and intelligent female characters, has not only written the best-selling series in history but is the first person to lose her billionaire status as a result of her donations to charity, starting many charitable foundations herself.

The impact of these women is monumental. Girls’ self-worth and confidence are growing and as a result, there is a greater amount of strong, determined women, who understand their own capabilities, making a change. (Such as the Women’s March and number of women in Congress)

“I think women heroes are inspiring to young girls, seeing women leads and women saving the day is very empowering and is a type of gender representation that is essential,” junior Kate Shiere said.