“Dumbo” was a dumb choice for Burton 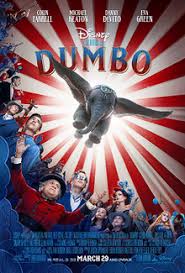 The theatrical release poster for Tim Burton’s 2019 reimaging of the classic children’s movie “Dumbo”. At the end of its opening weekend the film held a score of 50 percent on Rotten Tomatoes.

Tim Burton is a dark director who is popular for his eccentric horror movies and magical dramas. He is best known for his cult classics like “Edward Scissorhands”, as well as his animated features like “Corpse Bride”. Throughout all of the movies Burton has directed, from fantastical adaptations like “Sleepy Hollow” to studio remakes like “Alice in Wonderland”, there is a distinctive style that has made Burton one of the most famous directors of the day. However, his work is very niche, and as a result, he has never even been nominated for a Best Directing Oscar and has never won any other best directing award.

Burton’s most recent project is the live action reimagining of Walt Disney’s 1941 “Dumbo”. This film attempts to revitalize the well-worn tale of the outcast baby elephant who learns to fly. The new version, which was released nationwide on March 29, was written by Ehren Kruger and stars Colin Farrell as Dumbo’s caretaker, Danny Devito as a down on his luck old-fashioned circus owner, Michael Keaton as an upscale, but villainous circus mogul and Eva Green as a beautiful trapeze artist who comes to love Dumbo and, of course, Colin Farrell too by the end of the movie.

Burton is notorious for reusing his favorite actors, such as his former partner, Helena Bonham Carter and Johnny Depp, who have each starred in seven of his movies. This film is no exception to the favoritism rule. Neither Carter or Depp are in “Dumbo”, but with the exception of Farrell, Burton has worked with the all the leads of the movie multiple times. Devito has been in “Batman Returns”, “Big Fish” and “Mars Attacks!”, Keaton has played the title roles in “Beetlejuice” and both of Burton’s Batman movies and Green has starred in “Dark Shadows” and “Miss Peregrine’s Home for Peculiar Children”.

Despite the use of his tried and true casting method, Burton’s version of “Dumbo” flopped at the box office and was widely panned by critics. Unfortunately, the consensus is correct on this movie. The plot is a vast improvement upon the boring and occasionally racist (there is a character named Jim Crow that I will not get into, but has no place in any movie, much less one for children) 1941 film. The new plot introduces ideas about veterans, the maternal bond and exploitation. It does not stick the landing, though, with an ending that is anachronistic and a little hypocritical. It ends on an anti-animal abuse message that promotes animal-free circuses, which is great for today’s audience, but this movie clearly takes place about a hundred years ago and animal rights in circuses is an issue that has only begun to be addressed in recent years. Also, right after the definitive statement that animals are no longer used in their circus, Farrell’s character gallops into the ring on horseback, which seems like an inconsistency that should have been caught before production ever even began.

That moment, though, is the least of this over-indulgent snooze-fest’s problems. First off, it must be mentioned that no animals were used in the making of this movie and almost every scene relies heavily on Computer Generated Imagery (CGI). While that is clearly the most humane way for movies with animals to be made, this film overuses its CGI capabilities.

Attempts to remain true to the original movie, including a scene of dancing pink elephants, came off as ridiculous and boring when done with CGI. While the CGI did give real depth to Dumbo’s eyes that meaningfully conveyed emotion, it also clearly worsened the performances by causing most scenes to be shot on green screens, with much of the finished product, including fire, scenery and, of course, the animals, being added in post-production.

Burton also plays favorites behind the scenes, and his most frequent collaborator is Danny Elfman, who has composed the scores for 16 of Burton’s films, including “Dumbo”. Elfman is one of the best composers writing for movies today, and  Burton movies are normally lauded for their tasteful soundtracks. However, the score for “Dumbo” came off as melodramatic and saccharine.

Another element that Burton is famous for is his elaborate color pallets, and in movies like “Charlie in the Chocolate Factory” and “Big Fish”, that approach to scenic design has been perfect. In “Dumbo” it fails to cohere and the bright shiny objects that are constantly flashing across the screen only make the actors’ performances seem muted. Perhaps the problem is that for the first half of the movie everyone, except the two totally average children and the nonverbal, albeit very cute, elephant, are antagonists, making hard to find any of the adult characters compelling. They all came off as boring stock characters. Even Keaton, who is known for being over the top and outside of the box, was not even vaguely interesting.

It is notable that “Frankenweenie”, which came out in 2012, was Burton’s first animated film since “Corpse Bride” in 2005. To me it is clear that the reason for its positive reviews is that its quirky style and dark humor harken back to early Burton movies that made him the icon he is today. Many were disappointed when he did not continue that trend, and instead made “Miss Peregrine’s Home for Peculiar Children” and “Dumbo”. As an ardent fan of Burton’s early work, I am disappointed as well. Still, it is clear that he has a great talent, and I firmly believe that there are more brilliant Burton movies to come.