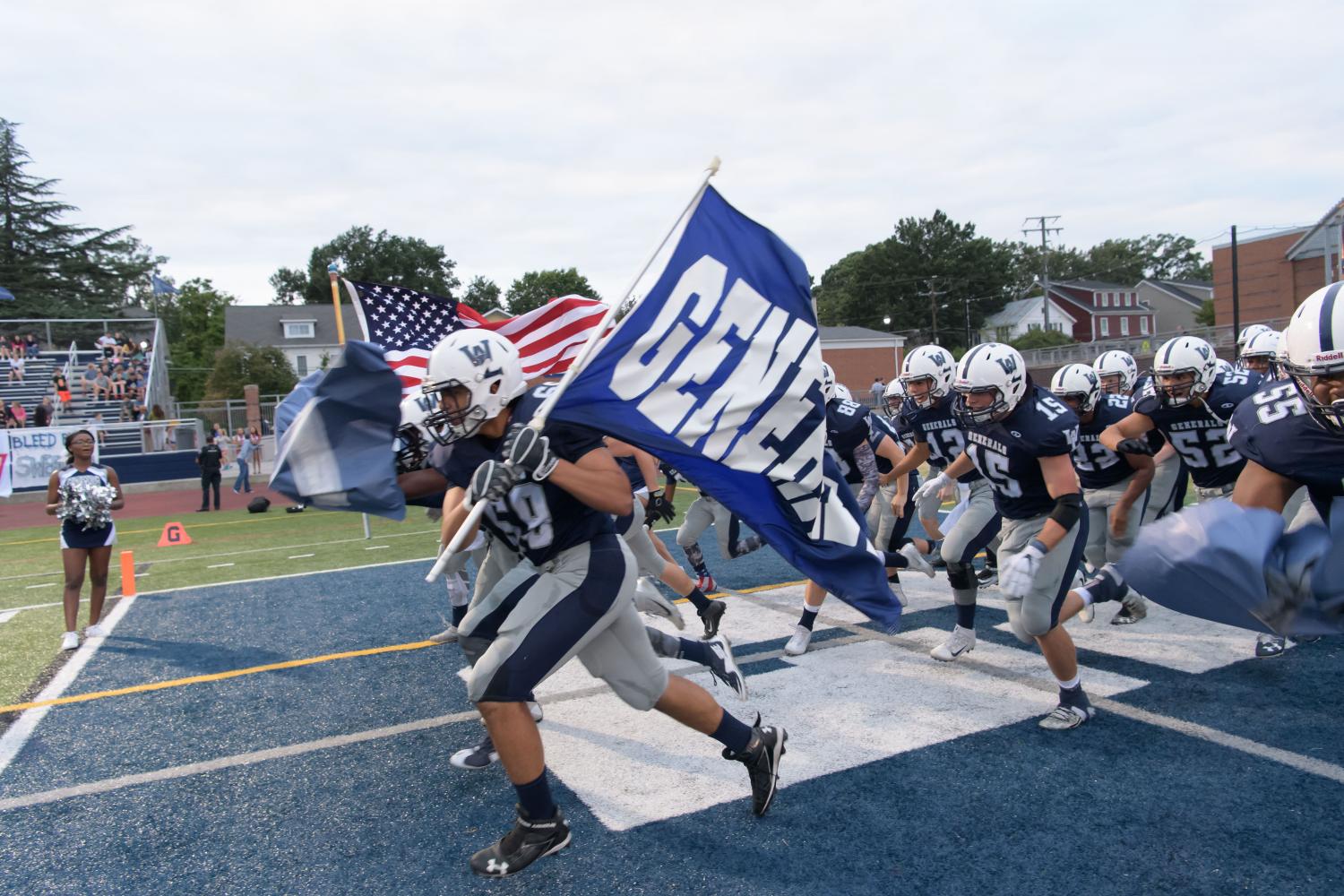 The varsity football team rushes the field at the fall pep rally. The team hopes to continue that success into the coming fall season with the addition of new players.

The varsity football team’s season this past fall culminated in the defeat of rival Yorktown High School and a spot in the Liberty Conference playoffs. With many seniors graduating this year, it is up to the returning players to lead the new team to a successful year next fall, beginning with training over the summer.

Head coach Mr. Josh Shapiro reflected that the improvement from last season resulted from the hard work of the players, who finished off the regular season with a 5-5 record. “The kids just kept grinding and putting their backs against the wall, and highlighting this were our wins against Yorktown and Wakefield, our win in the Homecoming game and that we qualified for the playoffs,” Coach Shapiro said. This coming season presents a challenge to the team, who this year graduated many key players. “We graduated some players who either threw the ball or caught the ball for over 3000 yards,” Shapiro said. “That’s a lot of offense, and it’s uncommon to have weapons like that in a given year.”

Junior offensive and defensive tackle Gabriel Matteson will be entering his third season playing for the varsity team. Matteson believes this coming season has the potential to be better than last season’s tying record, the absence of many seniors allowing newer players to step up. “Last year we had some really great players in skills positions, mainly our receivers,” he said. “We continued our streak by making it to the playoffs for the third year in a row, and we took the title of county champions for the first time in a few years. We are lucky to have some new prospects for a more play-driven offense who are able to get a lot of practice in for this year. To improve, the team’s goal should really be to maintain all the progress we’ve made while improving our record to show how far the team has come.”

Training off the field is critical for the football team to prepare before official practices begin at the end of July. This includes conditioning and visits to the weight room multiple times a week. Junior long snapper Evelyn Smith, who will be entering her first year on the varsity team, said that in order to grow as a team the players must train as a team. “As the years have gone by we come together as a family,” Smith said. “This year is the year we really have each other’s backs. We will gradually increase the weights and run harder. Summer [training] is crucial.”

Coach Shapiro believes that the best way for the team to be successful next year is for the players to work hard and play fair. “I feel like the team has to be disciplined and accountable,” Shapiro said. “Our guys have to continue to be responsible and continue to be coachable. If we can do that, than I think the wins can take care of themselves.”