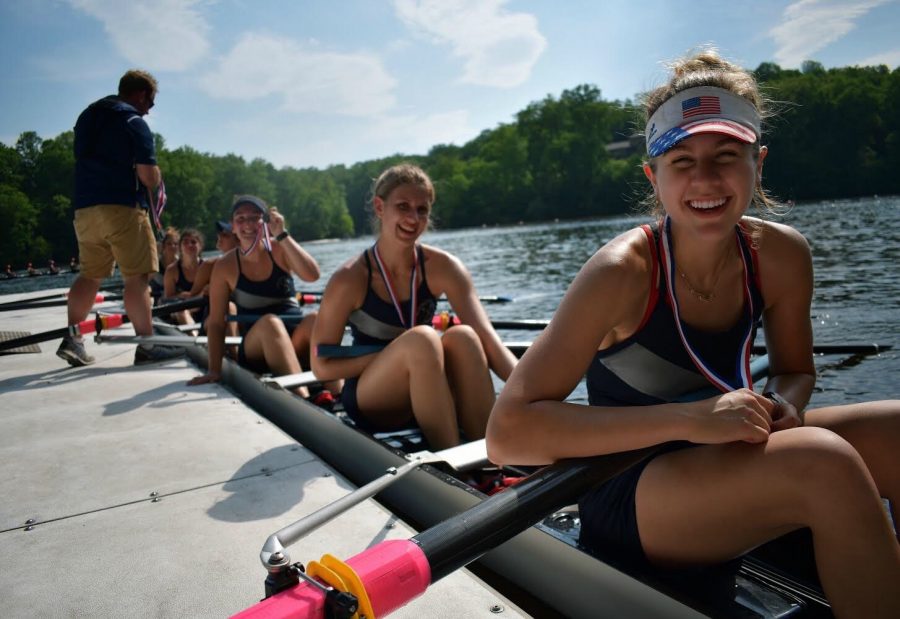 Junior Aidan Wrenn-Walz sat at the catch, the oar gripped tightly in her hands and her eyes set dead ahead, beyond her coxswain’s head and towards the forest surrounding the body of water. Three boats were to her left, and one to her right, yet she knew she should not look. All she needed to focus on was stroking her boat and leading them to victory.

“Yorktown… Wakefield… NCS…. Washington Lee…” The starting line referee read out the school names as each rower turned their blades into the water, seconds away from pushing off into six minutes of glorious, yet painful competition.

“Ready… Attention… Row!” And they were off, pushing against the foot boards with all their might. It is intense, painful, but Wrenn-Walz is not fazed by this. This is what she is all about.

Wrenn-Walz has been rowing since she was seven. It has always been a part of her life. Her parents, who both rowed in college, had a big influence on her when she first started, and still do. Her father is the president of the Potomac Boat Club (PBC), where they met, and where Wrenn-Walz rows in the summer and fall.

The school’s crew team practices in the spring there. Wrenn-Walz is one of the captains of the girls crew team, and holds the record for the best 2k in the history of girls  crew at the school. The 2k is a 2,000 meter piece on the ergometer (rowing machine) in which rowers try to finish as fast as possible. It is one of the most important things in crew. Additionally, Wrenn-Walz made it on to the Junior National Team this past summer. However, she was caught on the unfortunate side of a mix up.

“[The coaches] had us situated towards the base and the national anthem played and right after that they said if you’re sitting in this cove right now congratulations you’re going to the Czech Republic on your national team,” Wren-Walz said. “I cried, it was amazing. It was such a big moment.”

The Junior National Team holds an event where people who did not go to selection camp could make that team in smaller boats, and usually to secure the spots the camp sends boats to these trials and those already selected for the National team, race these boats and usually win. This summer, however, they did not win. The team then had to cut two rowers who were already guaranteed a spot on the team.

“One day they just called me down and they said ‘we have to release you, but you’re young so you can come back next year,’” Wren-Walz said. “I was just kind of crushed because I had a really good two weeks and I thought I’d earned my spot.”

Despite this setback, Wrenn-Walz is nowhere close to giving up on her dreams, and is known to have a positive attitude.

“Next year Worlds (Rowing Championship) is in Tokyo and I’m planning on getting there somehow,” Wrenn-Walz said with a determined smile. “I have two more years of eligibility for the national team so I’m going to try to do that. Eventually I want to go to the Olympics. It’s been my goal for so so long even before I actually started rowing.”

Head coach of the school’s girls crew team, Dane Underwood, had only good words towards Wrenn-Walz.

“She’s always working very hard and putting in a lot of time,” Underwood said. “It takes a certain kind of personality to get up and go every day and just keep working at it… so it feels like she’s kind of on the cusp of greatness. There’s no reason she can’t hit the same highs and make the team next year and not only have national success but really strong success here at [the school.]”

Wrenn-Walz is also a huge influence on her team.

“She sets the example of how fast somebody can be…having somebody down there (with a low 2k) shows every else it’s not enough to be at an 8:40- so I can push harder,” Coach Underwood said. “Not that everyone’s gonna hit 7:10/7:20 but everybody can push. There’s all that room to push into to get faster.”

When not rowing for the school, Wrenn-Walz rows with her best friend and scull partner Catherine Kiyonaga at Potomac Boat Club. Different from sweeping, using one oar with two hands, they scull, two oars for each hand, together on a small, two person shell, or boat. Kiyonaga is a junior at the Academy of the Holy Cross. They have known each other for about two and half years now, and they even have their own instagram account together, @wrennagarowing, where they post photos and funny videos they make during their time rowing together.

Despite how much rowing is a part of her life, Wrenn-Walz has managed to find a balance with rowing and everything else.

“It’s just about my routine,” Wrenn-Walz said. “I get up at 4:45 in the morning and I go row and it actually leaves time for me to do stuff after school.”

While she has big dreams in the future regarding rowing, she also knows she might want to pursue other things as well.

“There’s a sign over the bay doors that says ‘row like a champion today’. It really inspires everyone at our club to just, even if they’re not the best, to act like it,” Wrenn-Walz said. “So on my water bottle, I just wrote ‘like a champion today’ because it’s not necessarily about rowing it’s just about attacking whatever you can like a champion.”