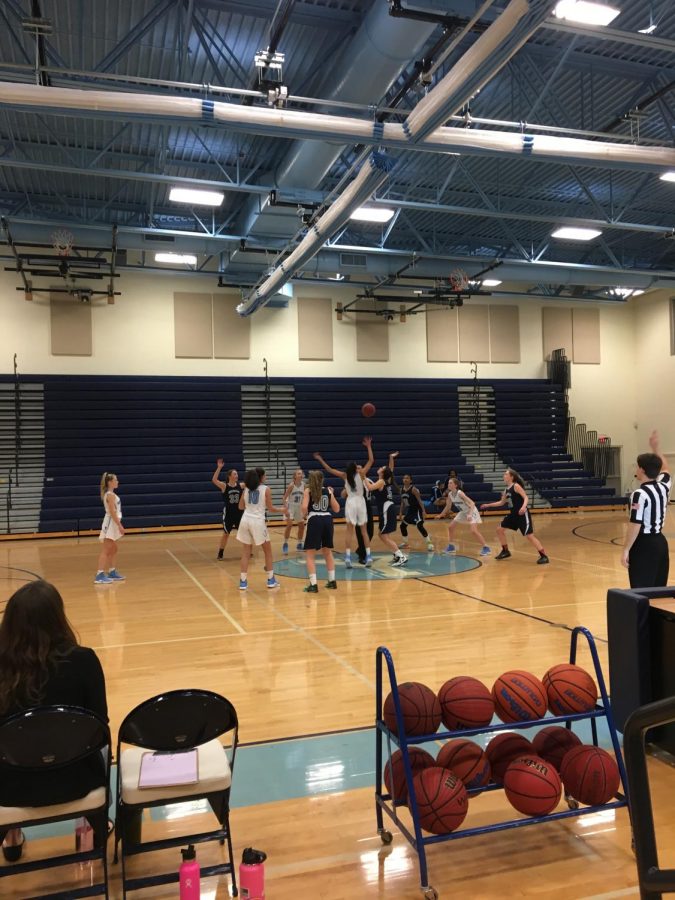 The freshmen teams prepare for the tip off as the ball is thrown in the air. The Generals won the toss.

The freshmen girls basketball team took on the Yorktown Patriots on January 11. Though it started as an equal battle with the score being teasingly close, the Patriots ended up taking the win with 34 points to the Generals’ 22. It was an intense and long awaited game.

“I wasn’t as much nervous as I was excited for the game. I knew that our team had been practicing a lot and that we were prepared,” freshman captain Sally Ann Work said.

The Generals won the tip off, but the Patriots recovered swiftly and scored first through a free throw after being fouled on a shot. The Generals, however, quickly came back, making the score 2-1. The game stayed relatively consistent through the first half, either team having the opportunity to win.

“I was incredibly nervous for the game since Yorktown is our rival,” freshman Fiona Williams, a player from W-L, said.

By halftime, the Generals had picked up their lead 14-10. The players stuck to their trusted plays and defense, and it showed. The team played well by relying in their abilities and moving the ball around, but the team played as if each player was thinking of how to help themselves more than how to help the team. For example, shooting for a hard basket when there was another open player open.

“I think we each individually had great moments, but we could have done better as a team,” said Williams said.

“In the first half, we played really well. Then as soon as halftime came, and we got a good yelling, it went downhill,” freshman player Catia Bonzano said.

The Generals held their heads up high, and did not let the loss affect them negatively.

“Overall, I’m very proud of what we accomplished, because we did very well for most of the game and in the end we learned to not lose our motive,” Williams said.