Running to the End 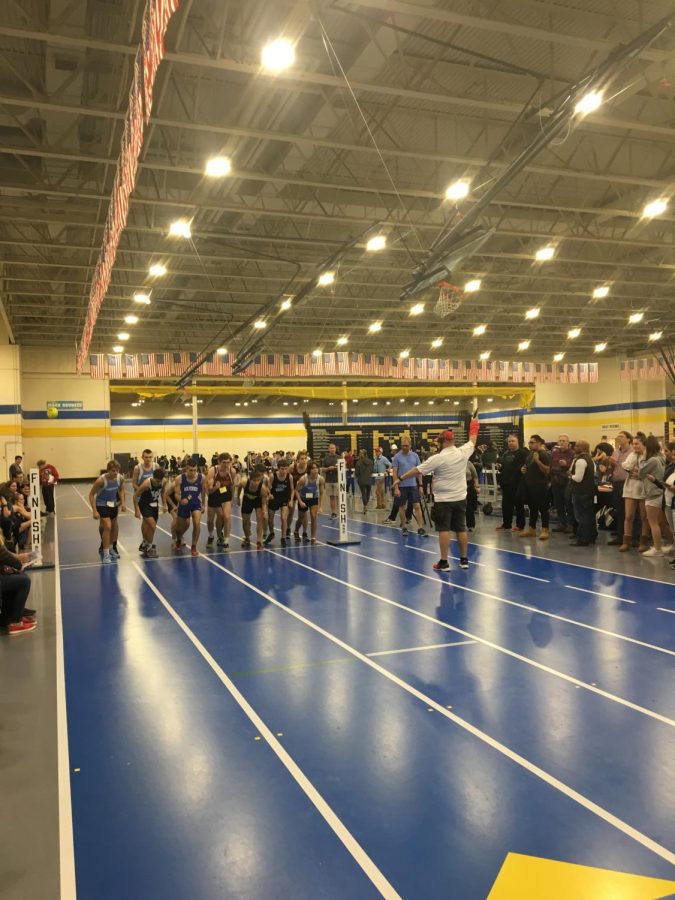 Varsity boys get ready to run the 1600 meter run finals. The boys bend their knees getting ready to run, waiting for the starter to shoot the starting pistol, which marks the start of the race.

“Interacting with other schools is one of the things I love about track, everyone is usually very nice,” said senior Phillip Ray, who competed in multiple events, including the 55 meter hurdles and 4×200 relay. A 4×200 is where two teams each with four runners compete, and each runner runs 200 meters.

All indoor track meets are at T.J, because it is the only facility with an indoor track in close proximity. The doors opened at 5:00 p.m. on Friday, with the first event being the girls and boys high jump and the 4×800 meter relay, which is when two  teams of four runners compete, and each runner runs 800 meters.

“I had a goal of beating my personal record for high jump and I beat it,” Augustin said.

Next was the running events with girls and boys 4×800 meter relay, with only two teams per school. In both events Yorktown came in first, and W-L in second.

“Running relays are my favorite part about track because, the feeling of you and your friends pulling up on these other teams is so much fun,” Ray said.

“The toughest part is dealing with the large number of students on the team.  It is great that so many students want to be involved, but it is also hard to organize workouts with over 100 people on the track at one time,” head coach of indoor track, Mr. Bill Drake said.

While students are waiting to compete they stand  in the middle of the track where most teams wait and stretch while talking  with friends and cheering on teammates.

“I visualized what I am about to do before I even get up to the line, but once I get there I clear my head as much as I can…thinking is for practice, thinking will only mess you up when you compete,” Ray said about what he does before a race.

As regular season indoor track comes to an end many students continue onto outdoor track in the spring.

“I look forward to watching our current athletes continue their improvement all the way through the end of the school year,” Coach Drake said.