Playing through the pain 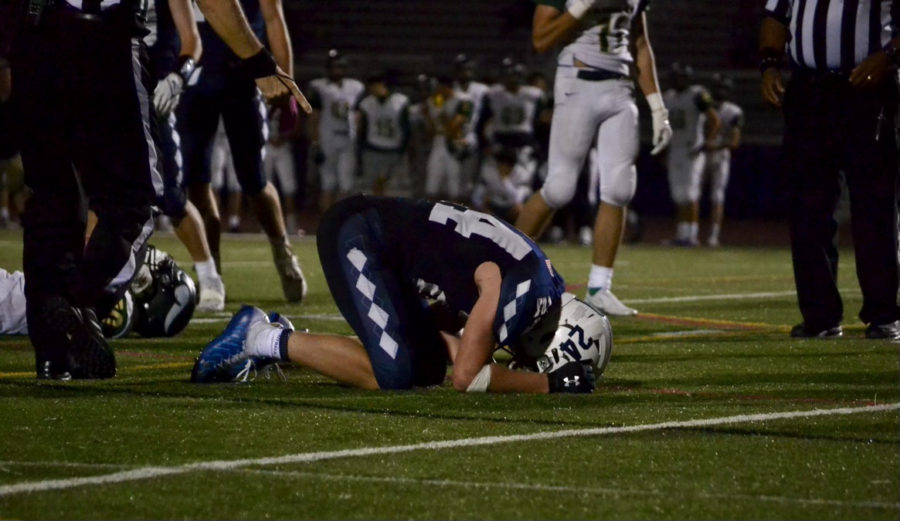 Junior Jackson Broadwell kneels over in pain after a collision with a Langley player, who lies behind him

The school’s Varsity football team has completed its’ 2021 season, the first school sport to return with full attendance at games. The home games were wildly energetic and well attended, but there was a downside to an otherwise successful return to the field.

Throughout the season, injuries of varying severity sidelined players at a staggering rate, typically multiple injuries per game for both teams.

Brown, usually a wide receiver and defensive back, was sidelined for the entirety of the fall 2021 season.

“Last year I tore my ACL and I didn’t know that it was torn for about five  months after… I went in to get it checked out and they said ‘yeah, your ACL is torn,’ I had no idea, I just had a little bit of pain.”

Brown underwent surgery as a result of his injury, which he obtained during the spring football season.

“I needed to get the surgery because my meniscus was torn, too, and [the doctor] said that later in life that could create a lot of problems like arthritis… and I might as well get it before college. I got the surgery about two weeks after I learned and then it was really rough afterwards. I was on a lot of pain meds… I couldn’t walk for a while. I spent six weeks on crutches and six weeks in a brace; and I’ve just been doing physical therapy and getting stronger since then,” Brown said.

Brown is committed to Duke for diving, and described how his injury impacted his future athletic plans.

“I told the [diving] coach immediately that it had happened and he was just like ‘yeah, get the surgery, get better’,” Brown said. “Right now my workouts are designed towards getting me back to diving. Obviously, I can’t dive for the W-L team this year or my club team until May. I’m not able to dive right now, but I’m able to strengthen my leg in a way that will get me back to diving and I have to keep up my stretching and everything.”

“It’s pretty annoying because there’s a decent amount of kids that get injured,” Barolo said.  ”It messes up the whole game plan and the player that usually plays next to you isn’t there, so someone else has to play out of position to fill in their spot.”

Barolo had his own experience with being sidelined during the season.

“I injured my left ankle at the beginning of the year,” Barolo said. “I just got tackled weirdly at one of the scrimmages we were in. I was out for five and a half weeks.”

Junior Brandon Brigner has been playing for the school since he was in eighth grade.

“At first I dislocated my knee in the Wakefield game, then I decided to play in the Langley game, which was two weeks later, and then I tore my ACL,” Brigner said. “I feel like a lot of people recently have torn their ACL, maybe I wasn’t paying attention last year… there’s definitely been a lot of injuries.”

“I wouldn’t say it affected the [team] chemistry, but it definitely made it difficult because people who didn’t usually play certain positions had to go play those positions; and it was kind of hard to keep the defense going,” Brigner said.

Brigner also competes  on the school’s track team, but he was sidelined due to his injuries sustained on the football field. There is no easy explanation for the influx of injuries, but Brown speculates that the lack of rest from the previous season moved to the spring due to the pandemic may have contributed to the problem.

“A lot of the juniors and sophomores from last year who were playing up on varsity had zero break; because right after that season ended, we went right into summer conditioning workouts and that just fed into the season,” Brown said. “One thing that we kind of lacked was strength training to be honest; I know that helps a lot with injury prevention and we did lift a lot, but it was more for sheer size as opposed to injury prevention.”

The amount of injuries may have put a damper on the team’s performance, but the general consensus from the players was that the team’s spirit never faltered.

“Anyone who wants to play football in high school should definitely go for it,” said Brown. “It may not seem like a big deal to everyone, but I can see why people get stuck in their high school football days because it’s just so much fun… even this year when I got injured, I was still a huge part of the team. I went to dinners, I did my senior night, I was a captain at the last game, so I didn’t just give up on it because those guys; I’m really close with them. I’d love for anyone who wants to play football to go ahead and try it out, you should really really make sure you’re doing injury prevention work alongside it because it is a physical sport.”