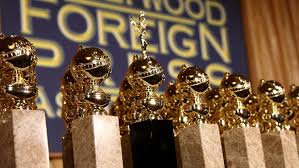 Hundreds of stars gathered for the Golden Globe Awards at the Beverly Hilton Hotel in Beverly Hills Sunday January 10. The show was hosted by Ricky Gervais for the fourth time, who came back from a three-year hiatus due to criticisms of his hosting style. His jokes have been called rude and unfunny by news outlets like Hollywood Reporter, Telegraph, Entertainment Weekly and others. Fortunately, while his jokes were still considered by many to be extremely mean this year, none of them offended too many specific people. The show received generally favorable reviews and kept thousands of viewers entertained.

The Best Drama Motion Picture and Best Musical or Comedy Motion Picture categories are considered to be the most prominent indicators for this year’s Academy Award (Oscar) Best Picture nominees and winners. The Golden Globes has always had high viewership, and

winning an award is always considered to be a huge honor. However, the Oscars tend to bypass the Golden Globes in importance. “I know that the Oscars is the most important of the award shows, but I’ve always enjoyed watching the Golden Globes the best,” freshman Matthew Hopper said. “It has a completely different vibe than other shows. The actors from two almost completely different worlds coming together is great, but then on top of that they all sit at tables. That’s just too cool.”

The Big Short, Joy, The Martian, Spy and Trainwreck were nominated for Best Musical or Comedy Motion Picture this year. For the most part, these films received favorable reviews from many respected reviewers, were entertaining and well made. This year no musical motion pictures were made, so the category is all comedies. Each of the films is comedic to a different extent. Spy and Trainwreck are both slapstick, raunchy, ridiculous comedies. Trainwreck  presents a few dramatic and tender scenes, while Spy doesn’t at all. The Big Short and Joy are both quite serious with the exception of a few funny moments. The Martian has a similar structure, but with a bit more comedy than the previous two and even more action. At the show, Matt Damon joked about his film’s category saying, “We’re a musical.” It was consistently predicted by reviewers that The Big Short would win the category.

The Best Musical or Comedy Motion Picture was presented second to last and surprised a few people when the Award went to The Martian. The Big Short picked up no awards throughout the night, and neither did Spy or Trainwreck. Joy received one award for Best Actress in a Musical or Comedy Motion Picture for Jennifer Lawrence’s leading role, while Best Actor in the same category went to The Martian for Damon in the title role. “I was so psyched when Matt Damon won the Best Actor Award. That movie was wonderful, and he was probably the biggest reason for that,” freshman Rowan Meltmar said. “When the whole movie won later in the night, I was ecstatic. It was action packed, intriguing, smart, thoughtful, and even a little funny. They totally deserved their wins.”

This year Carol, Mad Max: Fury Road, The Revenant, Room and Spotlight were nominated for Best Drama Motion Picture. All five received favorable reviews and were masterfully done through unique and drastically different styles of filmography. The scripts were also all interesting and executed well by all actors. None of the contenders from this category were at all similar. Mad Max: Fury Road was the only movie that’s nomination had even remotely surprised critics. It is also the only of the nominated films that was not released in the past two months.

Spotlight was highly favored to win above the other contenders, so many analysts, critics and viewers were surprised when it was beat out by The Revenant at the end of the night. Earlier in the evening, the movie also took trophies for Best Director of a Motion Picture for Alejandro González Iñárritu and Best Actor in a Drama Motion Picture for Leonardo DiCaprio. On the other hand, Spotlight took home no awards.“I was watching The [Golden] Globes last night, and I was half asleep by the time announced the last category, but I heard them saying The Revenant had won. I was shocked,” sophomore Christian McCord-Snook said. “I saw Spotlight, and I thought it was one of the best and most important movies I’d seen in a long time. I think they were robbed.”

The Golden Globes has been a very important ceremony since its creation in 1944. It is the one award show which honors both television and film actors. Film and television buffs look forward to this program and the excitement of award season. The show did not disappoint. “I watch the Golden Globes every year. I know they aren’t the best or most important award show, but I always really enjoy them,” Hopper said. “This year there were several unexpected winners and a lot of rather odd, yet entertaining bits done by presenters. It was really a very nice night of television honoring those that make amazing film and television.”