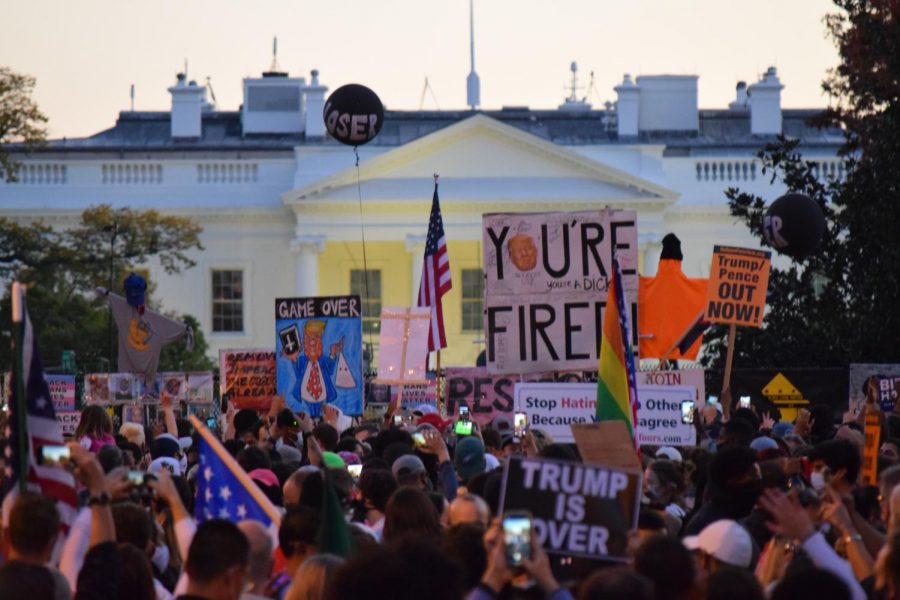 Residents of Washington, D.C. gather in front of the White House to celebrate Joseph Biden's win in the 2020 General Election. Before the election, several of the school's students participated in get-out-the-vote campaigns.

Although the majority of students at the school are unable to vote in local and national elections, that doesn’t stop them from spreading their political ideologies. From fundraising to protesting, students have proven that no matter how small the operation, they will use their platforms to promote and discuss issues affecting themselves and their locality.

“Having a place [students] can come and talk with people that care about the same things they do, and have a lot of the same opinions on issues, can be really nice,” co-president of the Young Democrats Club (YDC) sophomore Jillian McLeod said.

McLeod joined the Virginia branch of the nation-wide YDC organization in the fall of 2019. As a member, she became active in municipal activities and discussions with fellow students and guest speakers. When a leadership opportunity presented itself within the club, McLeod and co-president senior Sofia Sosa both reached out and applied.

“Our overall mission is to engage students; to get them politically active and interested in politics,” McLeod said. “We like to educate them on democratic activities and opportunities for volunteering. Really, just give them all the tools they need to become engaged democratic citizens.”

McLeod helped organize and  took part in COVID-19 friendly volunteer opportunities. The Virginia Democratic Coordinated Campaign contacted McLeod and asked if the YDC would participate in a phone bank with other Arlington high schools. McLeod and YDC members canvassed Arlingtonians on behalf of Democratic Senator Mark Warner and Representative Don Beyer. They also partook in a get-out-the-vote campaign, encouraging residents to vote for President-Elect Joseph Biden.

“I think it was great for people our age, specifically the young Democrats, to get involved,” McLeod said. “It was such an easy and accessible way to get out the vote and volunteer, to put yourself out there. That is something that is kind of challenging for people our age.”

The YDC also coordinates with other clubs to create environments for those still discovering their position on the political spectrum. The YDC’s current goal is to raise awareness of political activism as a whole. The League of Women Voters (LWV), the Gay-Straight Alliance (GSA) and  the YDC had planned to work together during Diversity Day to encourage inclusivity within the school. McLeod stressed open exchanges from curious students, some still forming or familiarizing themselves with more progressive beliefs.

“A large component of the future plans will be education and providing that safe space that I talked about earlier,” McLeod said. “Where people are just coming together with like-minded people who want to express their opinions.”

Aside from alignment with like-minded clubs, the YDC often partners with the Young Republicans Club (YRC) to exchange opposing ideas and principles in a civilized manner. YRC president junior Thomas Sullivan is supportive of the friendly debates that happen between the clubs. The debates between the two clubs have now become somewhat formal amongst the groups.

“I would be in contact with them so we could determine what topics we would discuss, that [way] we could all prepare,” Sullivan said. “We would talk about things from the election, to the situation in the Middle East, to the name change that took place.”

Though the YRC has not yet begun any club projects, last year it ended on a hopeful note with new recruits. The YRC maintains a few members, as Arlington is a more liberal area. They encourage any curious high school students to come discuss their viewpoints on issues in the community.

“The Young Republicans Club pretty much just provides a platform for conservatives in Arlington,” Sullivan said.

For those searching for a more direct route to political action, the American Civil Liberties Club (ACLU) has become very popular at the school. Through the use of social media and youth outreach, the club has gained roughly 80 members this year, primarily sophomores and juniors.

“[ACLU co-president sophomore] Charlotte Lawson showed us a presentation, and went through everything about racial injustices in Virginia,” sophomore ACLU member Ellen Boling said. “From there, we talked about it and we talked about how we want to take action.”

Boling joined the union this year because  she feels passionately about the key topics discussed during the meetings. Because the ACLU has so many members, they are split into three groups: A, B and C. Recently, Boling and her subdivision (Group A) held a three-day bake sale and raised more than  $300 in donations to end voter disenfranchisement.

“Besides posting on social media to raise awareness, it was important to me that I actually did take action and fundraise,” Boling said. “[We] called and wrote letters, and did as much as we could for democracy in Virginia.”

For their next project, the ACLU will continue to focus on state-wide systemic racism. Boling and Group A will be writing letters to the state legislature about discriminatory behavior, how it affects Virginians and what steps need to be taken in response.

“[The issue of discrimination] is really important,” Boling said. “Everybody was talking about how they wanted to take action against it, because it was a really significant topic to everybody.”

Political dissension is not uncommon, especially with the capital of the nation in close proximity. However, whether students are more conservative, progressive or undecided in their political standings, there is an inclusive space for them at the school.

“For the future, I think that we’re just going to keep volunteering,” McLeod said. “I want to see [members] moving forward the democratic agenda, but keep what we stand for, following your morals and values.”