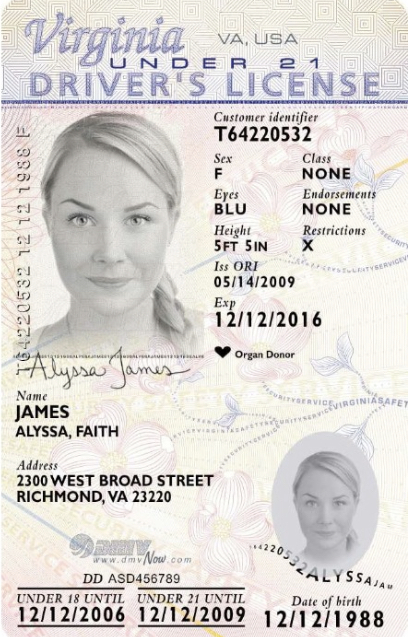 This example driver’s license found on the DMV website showed readers the information included on a license. Due to COVID-19, there are some changes to Driver’s Ed and the in-car portion that include the fact that the observation ride along requirements are waived in Virginia.

Carolyn Bohnert looked back and forth between the rear window and side mirrors and backed out of the parking space, thinking of the billions before her. This was a good start to her driving test. However, “business as usual” does not describe this experience, as everyone was in masks with the four windows of the Ford cracked open to let the air flow through. It was 2021.

“I would say the main question [I had] was how long it would take me to get through everything,” sophomore Bohnert, who took her driving test this March, said. “It takes a little less than a year if you’re on top of everything, because you have to take Driver’s Ed, and then you have to hold your permit for nine months before you can even get your license.”

In Virginia, prospective drivers must attend a Driver’s Ed program if they are under 18. Driver’s Ed is offered at the school, but many students choose private driving schools instead due to a myriad of reasons, which include that it fills an elective space. iDrive Smart is a popular source for their classroom Driver’s Ed training, which includes a two week course on Zoom.

“They tried to make it interactive, but there were 30 people in the class, and it was pretty early in the morning so nobody was really into it,” iDrive Student and sophomore Katy Schurtz said. “I was bored most of the time, I have to say.”

The minimum age in Virginia to get a license is 16 years and 3 months. Schurtz completed 25 to 30 hours of driving and is close to the 15 hours at night required to receive a driver’s license. However, she recalls the first time she drove. The turns in the Pentagon parking lot and all of the “nice” cars alarmed her.

“The next time I drove we went to a cemetery, which I think is a good idea because everybody’s already dead so you can’t kill anyone,” Schurtz said. “It was just such a better place because there weren’t cars. I was able to take care of my own speed. Definitely go to a place that allows you to learn and isn’t going to scare you as much.”

Schurtz took iDrive Smart’s course for her Driver’s Ed and in-car instruction, which she described as the generic choice. There is little difference in safety features and taught skills between 1 Stop Driving School, 2020 Driving School, and A Better Choice Driving School, but iDrive Smart is taught by police officers. Schurtz said she learned key driving skills in iDrive Smart.

“When you’re pulling into a spot, you go as far on the right as you can, and then you stop,” Schurtz said. “And you turn the wheel as far to the left as you can and then it just pulls you into the spot. So, little tips like that were really helpful.”

Bohnert, on the other hand, chose iDrive Smart for the Driver’s Ed but Instructor’s Choice for the in-car portion due to her brother’s good experience. There are six in-car lessons still required under the COVID-19 restrictions and the seventh is the test. In order to take the in-car portion, all students are assigned to a driver.

“I try to make Driver’s Ed fun by engaging with my students,” instructor Khalid Saaed, who works for Instructor’s Choice, said. “I have a history and political science background and I try to keep kids engaged during the driving portion. My goal is to teach Driver’s Ed in a way that stays with them for a long time. A good teacher is the one that inspires the students to think for themselves.”

“I am originally from Pakistan and moved here about 35 years ago,” Saeed said. “Got my license about 33 years ago. I was 21 years old. At that time you could walk into the DMV [and] take your permit test and your driver’s test the same day, no appointment necessary.”

The driving school has a final exam in order to pass Driver’s Ed in addition to the written portion administered at the DMV. Instructors prepare students for making quick decisions on the road in case of an emergency through questions that require common sense, such as learning what to do if the brakes fail.

“Driving is a privilege,” Mr. Saaed said. “You are operating a 3000 pound machinery at a very high speed. In the hands of ignorant and reckless people it becomes a weapon. Please don’t drink and drive and no [use of] cell phones or other distractions when you are behind the wheel.”

In fact, researchers at the University of Nebraska at Lincoln recently released the results of a survey on safe driving. The drivers who had taken a Driver’s Ed course were involved in fewer crashes: 11.1% of the Driver’s Ed group, as opposed to 12.9% of those who hadn’t taken a course, with 50,000 surveyed.

“It probably would have been harder in person, but it was still doable,” Bohnert said. “You need to get your license at some point [and] right now I’m less busy than I would be normally. So my parents kind of were like ‘okay, you might as well just do it now and get it done.’”