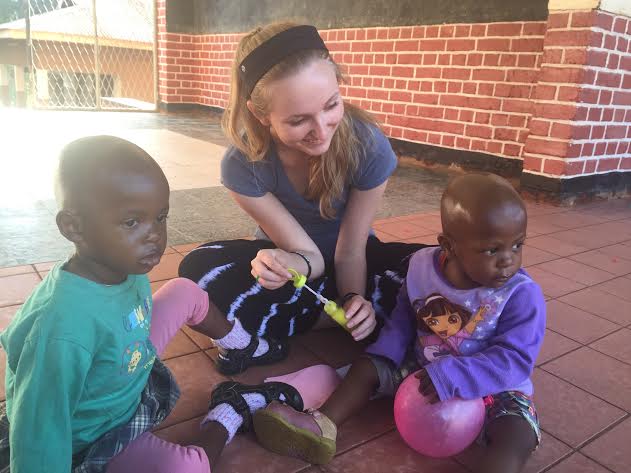 Senior Kathryn Carlson in Tanzania, a place that Doctors Without Borders supports.

Each year, on graduation, the senior class gets graduation “Swag Bags” with three to four items inside of them.  One day, English teach, Ms. Rosanna Marsh was sitting at her desk thinking about the waste of money that is put into creating these bags.  A student suggested the idea of donating the funds that would have been used for the bags to a charity, Doctors Without Borders.  “I was a little disappointed when I first found out we wouldn’t be receiving the graduation bags this year.” senior Keturah Adair said “Finding out that the funds that would have been used for the senior graduation bags were donated to an amazing cause, Doctors Without Borders, gave me a sense of relief.”

The senior class was very enthusiastic,  especially the senior class officers, when the idea to donate the funds was pitched to them.  Around the time that voting took place for who the staff speaker at graduation should be, seniors were also given the option to vote for Swag Bags or the donation to the charity. “The seniors really thought it was a good idea to donate the money when they first heard about it,” English teacher Ms. Marsh said. “It was during my first period class when a student suggested the idea and the others kids agreed and went along with it.”

Doctors Without Borders is a charity that receives their funding from several different people such as private sources, multinational corporations, and more.  Doctors Without Borders was established in France, so the original name was Médecins Sans Frontières.  Senior Kathryn Carlson went to Tanzania in the summer of 2015 to experience the medicine and treatment they offered there. “The medical technology in many third world countries needs to advance,” Carlson said. “The donation to Doctors Without Borders will really improve these technological advances and certainly going to a great cause!”