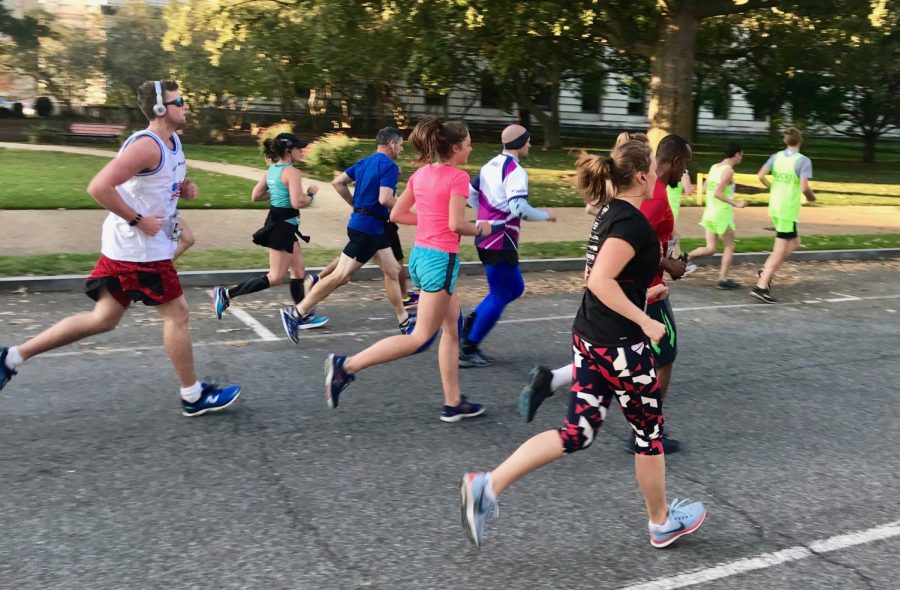 Runners around mile 2 of the 10k race.

The 42nd Marine Corps Marathon attracted over 20,000 men and women this year. Great running weather became a bit too warm as the day went on but runners of both the marathon and the newer 10k competition raced well. Athletes made their way through the 26.2 mile course in Arlington and DC, leaving them tired but prideful. Marines and supporters throughout the course generously cheered for athletes during the tough race.

The MCM is known as The People’s Marathon, being the only large marathon for which prize money is not offered. Getting into the run requires a lottery, and only 30,00 people are able to run because of number limits on the course. Anyone is eligible to enter the lottery which can gain them entry into the MCM. Men and women over the age of 14 can run, no qualifying time is required, and the course brings the tens of thousands of runners together in the United States Marine Corps (USMC) family. The first MCM ran over four decades ago in 1976, bringing the total finisher number to over 550,000 men and women. The original race price of just $2 has risen to a modest $99 in comparison to most large marathons (The New York Marathon costs a whopping $255). The MCM attracts people from all walks of life, including students from our school like senior Jason Nguyen, who finished in an amazing 3:48:03.

“Finishing was my favorite part,” Nguyen said of the race. “At mile 21, I died. I just kind of hobbled five miles, and at the end it was pretty exciting.” Overall, he said, the race went well but the end was terrible. “Mentally I was really good, and then physically I just couldn’t run.” Running the marathon was a big goal, which Nguyen shot for as a next step after running 10 milers with his dad. Training for the marathon prevented Nguyen from running weekend cross country competitions, but he didn’t seem to mind too much. The MCM won’t be his only one, according to the running goals he has set for the future. “I’ll probably do a different marathon, maybe next year.”

For people not ready to attempt a full marathon, the MCM 10k is a 6.2 mile course through DC and Arlington that was founded in 2006, having taken place a few times. Multiple students participated in the early morning race, enjoying the cool morning weather.

MCM offers multiple events throughout the year – the Quantico Triathlon, the Historic Half Marathon, as well as the Run Amuck, a muddy, obstacle filled 5k. A 17.75k run in Northern Virginia commemorates the foundation year of the USMC, and a 12k on the same day of the Quantico Triathlon offers a longer running challenge. Many more events throughout the year focus on commemorating lost family members, joining the military family, and crossing the finish line with pride.

To many, running long distances for fun seems ridiculous and painful but anyone who has run a race understands the motivation behind the madness. The sense of family and the camaraderie found in attempting to overcome such a difficult obstacle brings people together in a unique way. The MCM family is tens of thousands of members strong and is united under the military and the passion for running.