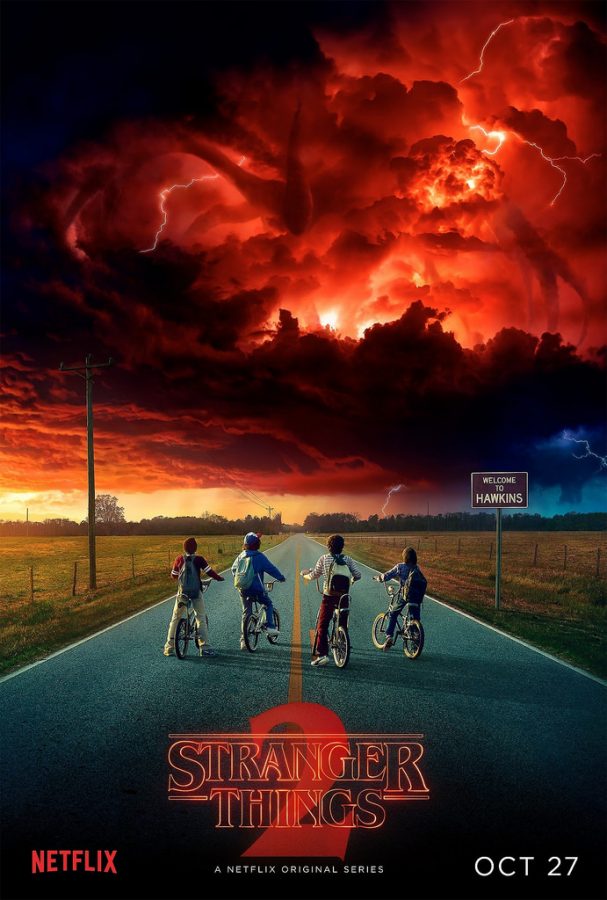 After a long wait it is time to take a trip back to the 80s in Hawkins Indiana, with everyone’s favorite Dungeons and Dragons playing nerds and psychokinetic girl. Stranger Things season two is finally here. After a much loved season one from the creators, Matt and Ross Duffer, more commonly referred to as the Duffer Brothers, season two promised to top   season one, and we think it clearly succeeded.

Season one ended with Mike, Dustin, and Lucas getting their friend, Will, back from a different dimension, known as the Upside Down. At the same time, their eggo-loving friend Eleven vanishes after destroying a child eating monster from the Upside Down, known as a Demogorgon. We lost all hope of Eleven’s return in season two, until seeing Hawkin’s police chief, Hopper, mysteriously put eggo waffles in a wooden box in the woods in the last scene of the season.

When viewers returned to Hawkins Indiana, the boys were reunited, but with a new girl, Max, joining the crew to fill the void left by Eleven. Unlike the boys, viewers quickly learned that Eleven is alive and healthy, living in a cabin in the woods under Hopper’s care. It appeared as if life in Hawkins was almost normal and moving on from the strange events of season one, but quickly it was revealed to be anything but normal. Will still has visions of the Upside Down and a monster trying to get him. This monster though, is not just the average Demogorgon.

The Upside Down monster featured in season two, proves to have a more serious plan to take over than the bloodthirsty, mindless predator from season one. When Will’s visions worsen, the scientists of the infamous Hawkins Lab diagnose him with PTSD. His mom, Joyce is skeptical, especially after seeing the outline of the monster chasing him on a video camera. It quickly becomes clear that the episodes are not just inside Will’s head.

Joyce and Hopper set out to reverse Will’s deteriorating health. As they do, the Upside Down grows drastically, infiltrating Hawkins through a network of underground tunnels. After much chaos, death and destruction ensues, Eleven, with Hopper’s assistance, channels all the energy she can muster to close the gateway between the two worlds and destroy the monsters from the Upside Down.

It was refreshing to see all the characters from season one come back for a second round of fighting the creatures of the Upside Down. Lovable as ever, every character touched the Upside Down of our hearts. New characters were thrown in too, like Max, a welcome addition to the crew despite being a one dimensional character with no development or range. Adding a new character to an already loved cast is risky, so let’s give the Duffer Brothers credit for making the addition at least tolerable.

However, the lack of dimension was aptly made up for by the wonderful development of an unlikely pair, Dustin and Steve. Although Dustin referred to Steve as a last resort companion early on in the season, by the last episode, the two seemed to have built a strong father-son-type relationship.

As season two came to a close, we were left with the conflict from season one resolved, but with new problems surfacing. The season finished on a high note with the boys at the Snowball Dance in Hawkins, with Eleven and Mike finally reunited. All seems to be at peace until the camera pans out from the dance and starts to turn, transitioning into the Upside Down where the shadow monster hovers over the dance. With season three just around the corner, things in Hawkins are sure to get even stranger.