The march against climate change 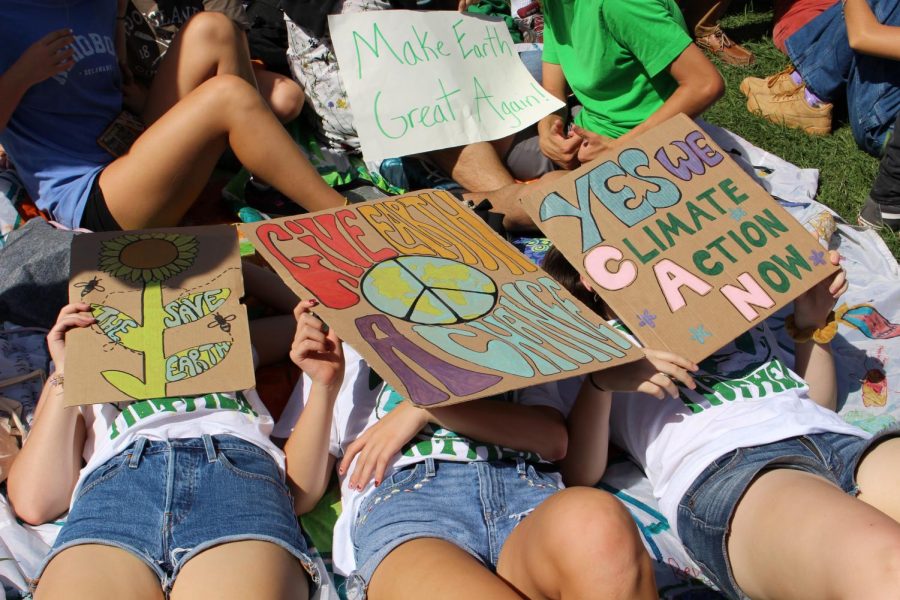 Students lay down with their homemade signs advocating for officials to acknowledge and try to better the issue.

On Friday, September 20, thousands of students came from many different schools into the major cities to march against climate change. The students carried signs and posters detailing the changes that they want the government to make to better address the issue of climate change. Young people are concerned about rising sea levels, pollution, and rising world temperatures, because they will have to live in this world longest. Seniors Sophie Beach, Audrey Hayes and Darsey Trudo were three of those students.

Beach was carrying her sister’s sign at the march. She is an activist for climate change and gun control and attends as many marches as she can. She called on students to “pay attention to the facts” when asked about people who do not believe in climate change and global warming.

“There’s no ignoring [climate change], it’s a real thing, and there is science to back it up.” Beach said.

Hayes helped organize the school’s involvement in the climate march. She advocated for the event before the start of the current school year and took about a month to organize school involvement. Her parents have been using sustainable products for as long as Hayes can remember, which helped feed her interest in saving the environment. She encourages people to make any small change they can to sustainable living and encourages them to educate themselves on the impact that humans have on the climate.

“At this point, the people in Congress and in power are kind of resting on their morals and prioritizing popularity over actual policy,” Hayes said. “The science has told us that we only have a short amount of time to restore our planet and since it’s my generation that’s going to feel the consequences of climate change the hardest, I feel like it’s all of our responsibilities in raising our voices. Because if we don’t raise our voices then how are they supposed to hear us?”

“Getting up out of your chair and disrupting your schedule to disrupt theirs actively disrupts them in a peaceful way.” Hayes said.

“It’s not that you need to go to protests to show your support,” Hayes said. “I think that’s something that people need to know. Yes, we would love if more people came, but that’s not the only way to express your support for policy and change.”

Darsey Trudo is a senior who also helped organize the climate march at the school. She also feels that climate action is a responsibility rather than a choice.

“We are the ones contributing to our eventual demise, and I don’t think that living a life of ignorance and ignoring our footprint is a good way to live,” Trudo said.

Ignoring the problem will only make it worse, Trudo stressed. So, it is also people’s job to attempt to fix the issue they have created.

“I would say the most exciting part [of the climate march] was seeing the amount of people who were there and knowing that it was an intergenerational issue.” Trudo said. “We saw kids from five years old to grandparents and older people up to 80 years old, all there for the same cause. It was an interesting experience because compared to the gun violence walkouts of last year, the age range was much different and you saw a bigger turn out in general.”

In July and August, Trudo made flyers and circulated them through social media and sold t-shirts to help raise awareness for the march.

“I would say the toughest obstacle that I face whenever I walk out or a strike happens is talking to my peers about it and trying to convince them that this issue is bigger than a day at school. My main point is that you won’t remember what you did in class that day but you will remember when you walked out with hundreds of thousands of people.” Trudo said.

She said that she thinks many people at school do take this issue very seriously. Everyone who attended the march, and many people who did not, are very supportive of the cause, but there will always be people in school who try to make the issue seem like less than it is.

“Definitely standing up and walking out is a great representation of what you believe in, and I know a lot of people are deterred by how it looks [and] how people perceive them, or they’re scared to physically walk out of school. But once you’re there you really feel a sense of community with every one of your fellow strikers.”

Both Hayes and Trudo felt a strong sense of community at the march and both encourage students to get out and protest for things that they believe in.

“No matter the issue that seems current as of now, like right now we’re in the climate strikes, last year it was the gun violence strikes, those issues are important [and] not to be forgotten and not to be associated with a certain age. And always keep yourself updated because this is an ongoing issue.”