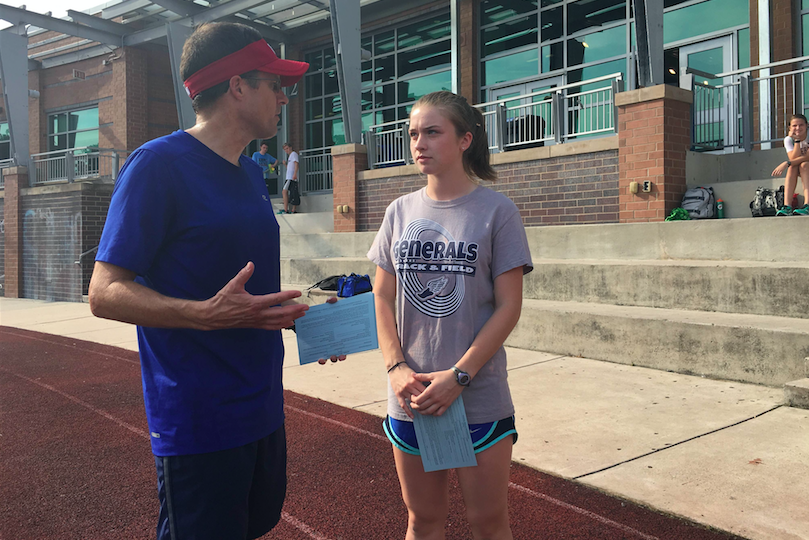 Off to the races

In recent years, the cross country team has seen success unparalleled in the school’s history, winning multiple conference and district championships and achieving a second place finish for girls’ cross country at the state championships in 2013. Much of this success was thanks to head coach Matthew Przydzial and assistant coach Laura Jenkins, who had coached together since 2006. After a decade of leading the Generals, the husband-wife team stepped down from their positions at the close of last season. “Right now my daughters are three and four years old,” Przydzial said. “They are just starting out in soccer, swimming and soon softball. I wanted to make sure I could make it to all of their games.”

Filling the space for head coach this season is former assistant coach Mr. Bill Drake. “Coach Drake has an excellent running mind,” Przydzial said. “I’m sure the new staff will bring some new ideas to the training aspect as well as coaching such a large team.”

Coach Drake hopes to continue the legacy that Przydzial and Jenkins had created. “Coach Przydzial has done such a great job getting this program to where it is now,” Drake said. “I want to maintain the successes he’s had and put my own individual stamp on the program.” With his experience as an assistant coach, Drake is familiar with the team’s dynamic and of the team’s strengths. “I know all of the returning runners,” he said, “and I know the routine that the team is used to going through. That definitely makes it a much easier transition as opposed to if I were brand new.”

Current varsity runner, senior Theo Nichols, was also a varsity runner under Coach Przydzial’s tenure. “Coach Drake has been around a couple years in track and cross country,” he said. “He uses a lot of the same resources and workouts used by the former coaches.” Nichols is looking forward to another successful year under a new coaching staff. “Hopefully we make a good run in the post-season,” he said.

One of three new additions to the coaching staff is assistant coach Ms. Dorothea Intorre. “I like [the team’s] enthusiasm, and their determination to push themselves,” she said. Intorre’s goals for this year are that the team shows improvement from both individual athletes and the team as a whole. “My expectations are that the runners show growth and that they push themselves to show that growth,” she said. “I’d also like to see some consistency with our strong packs running together.”

Coach Drake is prospecting a prosperous season. “I think we’re going to have an excellent team this year,” Drake said. “In terms of the varsity runners, with the boys having Jonny Jackson [‘19], James Gusmer [‘17], and Marco Viola [‘17] back, I think that we’re going to do very well.”

The assistant coaches are looking forward to a good year as well. “There’s a strong group of guys traveling together,” Coach Intorre said. “For the girls, we have a lot of individual strong runners like Laura Ramirez [‘17]. Then there’s a pack of freshman girls who I think have lots of potential.”

The coaches expect the large team of more than 100 runners to perform at their best and stick together, something that Przydzial had repeatedly observed in his decade of coaching. “The team has always had a family atmosphere,” Przydzial said, “whether there were 20 or 100 runners. I know that will continue no matter who the coaches are.”

If you want a picture to show with your comment, go get a gravatar.